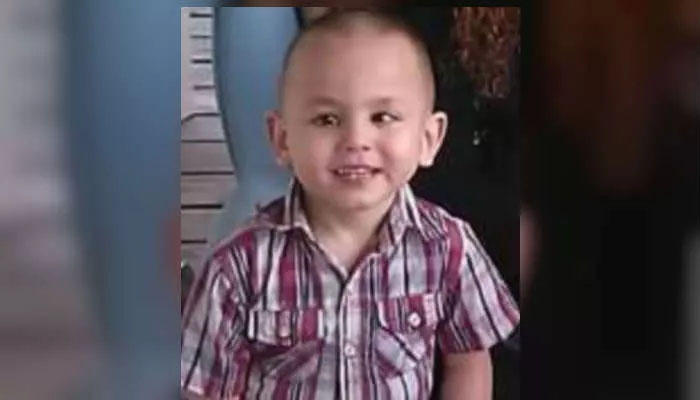 CLEVELAND -- The child's remains found buried in the backyard of a Cleveland home have been positively identified as missing developmentally disabled boy Jordan Rodriguez, according to the Cuyahoga County Medical Examiner's office.

The body uncovered Tuesday was found in bags in the ground, a statement from the office said. Office spokesman Christopher Harris said the body had not been dismembered. A cause and manner of death were still under investigation, Harris said.

The boy died because his mother failed to seek medical treatment, a prosecutor said in court Friday during a hearing for the boy's mother.

Thirty-four-year-old Larissa Rodriguez appeared Friday in Cleveland Municipal Court and was ordered held on $1 million bond on a murder charge. Police say Rodriguez was arrested Monday after police received a tip that she and her boyfriend had buried the child in their yard.

Cuyahoga County prosecutor Brian Murphy said during the hearing Friday the boy died because Rodriguez neglected to seek medical treatment for him. The boy reportedly had special needs and was unable to speak.

"Even though it was readily apparent he needed medical treatment immediately, Ms. Rodriguez failed to seek it," Murphy said. "The boy died as a result of her disregard."

"The state doesn't have any indication, really, of what happened," Walsh said. "We don't even know if murder is the correct charge."

Murphy said he felt the charges were appropriate.

Police were tipped off Monday when they received a 911 call from the brother of Rodriguez's boyfriend, reports CBS affiliate WOIO. The caller, who lives in Pakistan, said the man called him and said he came home to find the child dead several months ago.

"He said, when I came home, the kid was already dead," the caller told a dispatcher, according to a recording of the call obtained by the station.

The brother told 911 the boyfriend cried as he said he helped Rodriguez bury the body.

"He told me that something happened with one of the kids and they didn't call the cops. Basically him and his girlfriend buried the kid in the backyard," the caller said.

Rodriguez, a mother of nine, has a long history with local child welfare officials. Social workers have opened 13 neglect or abuse investigations on the woman since 1999, a Cuyahoga County spokeswoman told Cleveland.com. The latest was in December 2016, and that case was closed in February, the website reports.

Officials removed four children from the home Monday night, and the children were placed in emergency custody in foster care. Those four range in age from 16 months to 12 years, county spokeswoman Mary Louise Madigan said.

The home was found in "deplorable and unsanitary condition," according to documents filed by the Cuyahoga County Division of Children and Family Services and obtained by WOIO.

The home was dirty, with an infestation of cockroaches and rats, and one child was seen eating a sandwich that contained cockroaches, the document said.

Madigan said Wednesday that Rodriguez lost custody of her two oldest children many years ago, but Madigan would not reveal why.

"Our focus is on the safety of the children," Madigan said.

In an emotional statement to reporters, Rodriguez's sister Ana Rodriguez claimed the woman abused the boy. Ana Rodriguez said she notified child welfare officials numerous times and that they would respond but then close out the cases.

"That boy was sick, that boy was special needs, premature, he needed help, and all they did was [expletive] beat on that little boy," Ana Rodriguez said.

Larissa Rodriguez told police five of her nine children live with her. She allegedly said Jordan left with his aunt on Dec. 2 to visit his father in Texas.

According to a police report obtained by WOIO, Rodriguez said she did not know the phone number or address for the father or the aunt.

The boyfriend is currently jailed for failing to pay child support. He has since been transferred to a maximum security cell, according to WOIO. He has not been charged in the case.

Rodriguez couldn't be reached for comment while in custody.