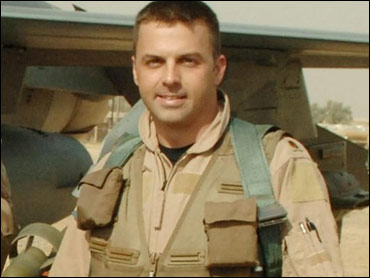 A U.S. government contractor that studies terrorism says an al Qaeda-linked insurgent group has released a video showing the body of a U.S. pilot killed in Iraq last year, a photo of his ID card and footage of his crashed fighter jet.

The video, more than 11 minutes long with English subtitles, was first obtained by IntelCenter, a Virginia-based company that studies terrorism, with several U.S. military, law enforcement and intelligence agencies among its prime clients.

IntelCenter says the video, released Thursday, bears the insignia of the Islamic State of Iraq, an al Qaeda front group, and its al-Furqan media production wing.

It also shows the pilot's body laid out on a plastic sheet in Air Force uniform, although his face is not shown, said Ben Venzke, head of IntelCenter. It was not immediately clear if the body was filmed at the crash site or elsewhere, Venzke said.

The U.S. military initially listed Gilbert as missing but later confirmed his death.

U.S. forces who investigated the crash have said insurgents reached the site before American forces could. At the time, video footage obtained by AP Television News showed what appeared to be the wreckage of his plane in a field and a tangled parachute nearby.

Venzke said there is no doubt the body and aircraft in the militant video obtained Thursday belonged to the U.S. pilot.

"They went to an extra effort to make the video accessible to Americans and the English-speaking world," Venzke said, referring to the video's English subtitles. "It's essentially a propaganda piece and criticism of U.S. involvement in Iraq."

The video contains a message to the American people and two clips, one from Osama bin Laden and a video of Abu Yahia al-Libi, the al Qaeda commander who escaped from a U.S. prison in Afghanistan, Venzke said.

Both of these clips are believed to be old, but IntelCenter has not confirmed that. The video also includes an audio clip of Omar al-Baghdadi, who heads the Islamic State in Iraq, according to Venzke.

When Gilbert's death was announced, the Air Force declined to say whether his body had been recovered, saying only that some remains had been found. Those remains likely enabled Gilbert's subsequent identification.

Gilbert was assigned to the 309th Fighter Squadron. He is survived by wife and five children, who live outside Phoenix.