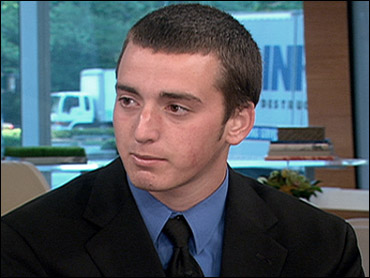 A tale reminiscent of the 1980s film, "Footloose" has made it to reality.

Tyler Frost, a 17-year-old senior at Heritage Christian School in Findlay, Ohio was warned that that he would face suspension and miss his graduation if he attended his girlfriend's prom at her public school -- but he did it anyway.

The move has resulted in his being labeled him a rebel in some places, but he told The Early Show in an exclusive interview he has no regrets.

"It was worth it," Frost told co-anchor Harry Smith.

Frost signed a contract at the beginning of the school year that prohibits dancing, handholding and listening to rock 'n' roll.

But the contract came back to haunt him when he asked his principal to sign a permission slip to let him attend his girlfriend's public school prom.

"(Word I might be suspended) kind of caught me off guard," Frost said. "I was kind of shocked that he was going to take that drastic of a measure."

In a statement from his school, Frost's principal, Tim England, wrote, "When the school committee ... set up the policy regarding dancing, I am confident that they had the principle of fleeing lustful situations in mind ... should a Christian place themselves at an event where young ladies will have low-cut dresses and be dancing in them."

Frost told Smith he doesn't feel any less of a Christian for attending the prom.

"I still feel I'm a Christian," Frost said. "I believe in the morals they've taught me."

Frost will not be permitted to take his finals on-time and will not receive his diploma at the school's official ceremony.

But Frost's stepfather, Stephan Johnson, who also appeared on the show, has hired an attorney and may sue the school. Johnson said the agreement doesn't cover what students do in after-school activities.

"It's kind of sad that it has to end this way," Frost said. "I was kind of looking forward to graduating with my class, you know, that's why you put in 13 years of school -- to graduate. And to just, you know, show up one day and just have it taken from you."

But Frost insists he doesn't have regrets, even with the consequences.

"It was worth it," Frost said. "It's a once-in-a-lifetime opportunity to go to prom, and I'm glad I went. Looking back, I think I made the right decision."