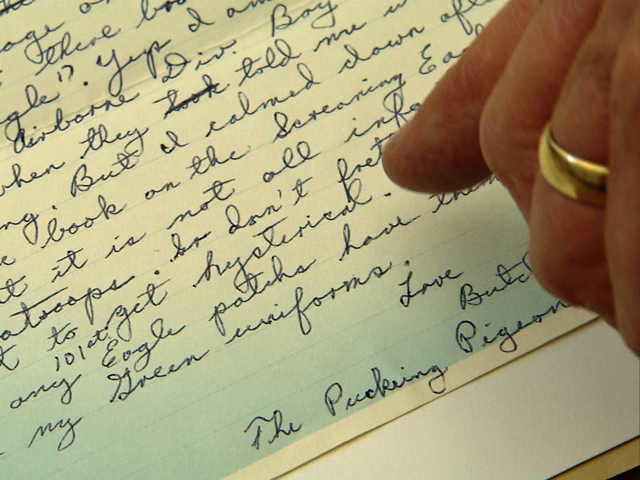 (CBS News) Thursday is the 69th anniversary of D-Day, when U.S. forces stormed the shores of Normandy during World War II.

A project aims to save American military history. They are just a few of the thousands of stories of America's war veterans being preserved by the Library of Congress.

"'So don't fret and tell pa not to get hysterical. Love Butch,'" said Bob Patrick as he read aloud from a letter.

It's called the Veterans History Project, and Patrick is the director.

"We're not trying to recreate history or rewrite history or disprove history," said Patrick. "Really, what that experience was like for those who go off to war and most importantly at the end, what did it all mean to them."

The library has collected 87,000 stories through audio and video recordings. It also preserves photographs, letters and diaries.

In one recording, Korean War veteran Jose Mares described being caught behind enemy lines: "He took a pistol, put a round in the chamber, and he put it to my head, to my right side, and I could feel the heat of the muzzle. And I said, 'Well this is it.'"

And in another, Frances Liberty recalled telling her father she was joining World War II as a nurse: "He said, 'No, you are not.' And I went down and joined. And I went back and told him, and he said, 'You've made your bed, and you're gonna have to lie in it now.'"

After years of keeping his memories of Vietnam to himself, Paul Tschudi is now adding his story to the collection. Navy veteran Heidi Wolff has volunteered to interview Tschudi for the project.

Drafted in 1967, he served 15 months as an Army medic. He returned emotionally wounded.

"I hid," said Tschudi. "I didn't really tell people I was a Vietnam veteran unless it was a close friend. "

Memories of Vietnam sometimes made him cry uncontrollably. "I think that I was mourning my loss of innocence," Tschudi said of the experience.

According to Tschudi, the project is helping him regain respect for his own service. "This is a way of honoring us and keeping that story forever," he said.

The stories of war - told by those who lived it and preserved for those willing to listen.

To learn more about the Veterans History Project, click here.