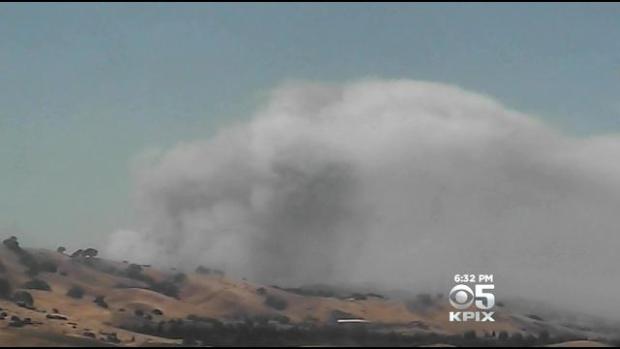 WINTERS, Calif. -- A day of diminishing temperatures brought big gains toward containment of a wildfire in rugged and steep terrain in Northern California.

The 10-square-mile Monticello Fire near Lake Berryessa in Yolo County was 71 percent contained Tuesday night - up 16 percent from the beginning of the day - with full containment expected by the end of the week.

CBS San Francisco reported that the fire, which began burning Friday night near the Monticello Dam, initially threatened 40 structures and caused the Golden Bear Estates and Canyon Creek Resort campground to be evacuated.

It was one of dozens of blazes blackening parts of the West in summer drought conditions that have brought a fire-friendly landscape.

The White House on Tuesday said President Barack Obama would ask Congress for $615 million to help fight the fires this season.

Fire crews also increased containment of several wildfires covering a combined 33 square miles of desert rangeland in eastern Nevada and southwestern Utah, including the 14-square-mile Lages Fire. No homes or other structures were threatened.

The California fire started Friday near the lake about 75 miles northeast of San Francisco that is a popular recreation spot that attracts boaters and campers during the Fourth of July weekend. It brought evacuations and road closures that were all canceled by Monday.

It was fueled by thick, brittle brush that has not burned for at least two decades and was fanned by gusty winds amid heat exceeding 100 degrees.

Such dry conditions have hurt the fight against other wildfires in Nevada, Idaho, New Mexico, Utah and Washington state.

In Idaho, all evacuations were lifted Monday as more crews were dispatched to the Colorado Gulch Fire in Blaine County as flames spread. The fire has blackened a square mile since it started Sunday, and officials expect to have it contained by Wednesday.

A new wildfire in central Washington has burned about 8 square miles of brush and grass.

The blaze that started Tuesday afternoon threatened several homes in the area about 4 miles west of Entiat. Residents in Mills Canyon and Dinkleman Canyon were told to leave the area immediately.