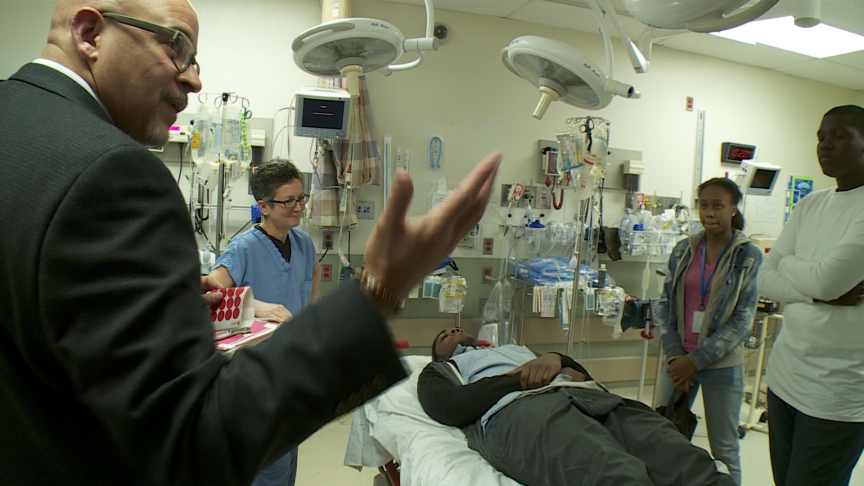 PHILADELPHIA -- In the hallways of Temple University Hospital trauma unit, Scott Charles tells a harrowing tale of 16-year-old Lamont Adams. A group of high school students gathers around him, as Charles explained what happened to Adams on September 23, 2004.

"He's going to glance over his shoulder just to see a young man fire four rounds to his back," Charles said.

Adams was shot over a $100 dice game. He was brought in to the same trauma unit that night where they are now standing.

"When he came in, he wasn't breathing at all," said chief trauma surgeon Dr. Amy Goldberg to the group, who are now at a trauma bay. The hospital where Adams died more than 10 years ago has been turned into a school of hard knocks.

More than 10,000 students in Philadelphia have visited the trauma unit for the "Cradle 2 Grave" program. They learn about Adams -- his life from birth to death.

"I'm not trying to politicize this issue for them," said Charles. "I'm simply saying this is the thing that is more likely to kill you than anything else when you're young. And I want them to take ownership of this."

"We were both really concerned that the students didn't seem to know the true ramifications of what bullet injuries and gunshot wounds can cause," said Dr. Goldberg, who started the program along with Charles.

The students watch an hour-long presentation that shows graphic pictures and video of more gun-shot victims. Some students can't bear to look. Charles asks the students to write down name(s) of people who would miss them if they were killed on toe tags.

"I want to expose them to the reality of this," said Charles. "If I had to say what the objective is of educating them, it's that."

The students finally listen to audio accounts of family members of gunshot victims. Few students broke down to tears. Lamont could have easily been any one of them.

"I can't imagine my mom crying because something happen to me or to my family members," said 16-year-old Roshelys Sanchez.

15-year-old Jordan Barreto did the program back in May. He says it changed his life.

"I was hanging in the streets with the wrong people, doing the wrong thing," said Barreto. "The program really opened my eyes that gun violence is real, and that people get killed for nothing."