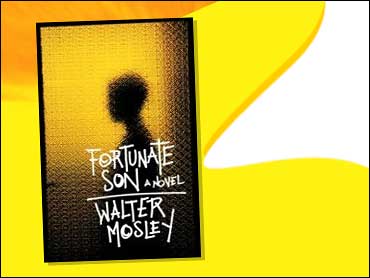 Best-selling author Walter Mosley has been a very busy man lately, much to the delight of his fans. Just six months after releasing "Cinnamon Kiss," the latest book in his "Easy Rawlins" detective series, he's out with another novel. "Fortunate Son" tells the story of two "brothers" from very different backgrounds.

One of the boys is growing up in a life of privilege, the other in a life of hardship. Their parallel experiences speak volumes about the meaning of self-determination. Mosley discussed "Fortunate Son" on The Early Show Wednesday.

"I wanted to write a book talking about the very disparate sides of America," he told co-anchor Julie Chen. "On one hand you have a white infant who grows into a young man who — everything is right for him. He's lucky. He's beautiful. He's brilliant. He's talented. He's rich. He's rich. Everything is going his way."

The other character could hardly be more different. "And then you have Tommy, a black kid whose father abandoned him even before he was born, whose mother loves him but he was born with a hole in his lung and he's sick all the time, and things really never go right for him," Mosley explained. The book is "about how these two boys come together, and form a really, really deep bond. And then how they're separated. And to follow them through their lives."

The question, as the title implies, is which one is really the fortunate son. "The book says a lot about our class and race. But it's also about much larger issues, about who we are as human beings. And what our responsibility is to ourselves," Mosley said. "I write to inspire thought about society, and I hope there's some possibility for change there."

This is Mosley's 23rd book, and he's already got his next project well under way. "Right now I'm writing a series of essays that has the tentative title "Cultural Famine," because it seems that Americans are starving in some way for truth and understanding about who we are and where we are. So I felt I had to write that book."