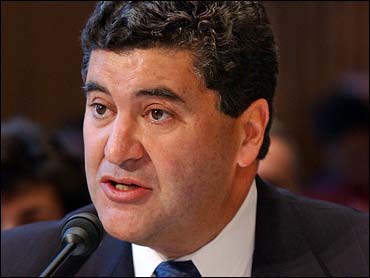 Two of the U.S. government's premier infectious disease researchers are collecting royalties on an AIDS treatment they're testing on patients using taxpayer money. But patients weren't told on their consent forms about the financial connection.

Drs. Anthony Fauci and H. Clifford Lane, who helped invent the experimental interleukin-2 treatment being tested around the globe, even tried to alert patients about their royalties but were rebuffed by their own agency.

More than 900 current and former scientists at the National Institutes of Health legally collected $8.9 million in such royalties last year for drugs and inventions they discovered while working for the government, according to information obtained by The Associated Press.

But until last week, none was required to tell patients about their royalties despite the government's promise in May 2000 that all scientists' financial stakes would be disclosed to patients.

That's because NIH didn't get around to enacting a policy requiring the disclosure until after AP requested the royalty payments and disclosure policies under the Freedom of Information Act in December. The policy was formally distributed last week.

The nearly five-year delay means hundreds, perhaps thousands, of patients in NIH experiments made decisions to participate in experiments that often carry risks without full knowledge about the researchers' financial interests.

"Quite frankly, we should have done it more quickly. But as soon as Director (Elias A.) Zerhouni found out about it, he ordered it done immediately," NIH spokesman John Burklow said.

"It's hard for patients to make an informed decision when they don't have all the information," said Bill Allison of the Center for Public Integrity, which monitors the ethics of government employees.

"When a doctor says, 'Here, try this experiment, it is safe, or it will help,' and the patient isn't aware he has a financial interest in the outcome of that treatment, it in essence is taking advantage of someone by not letting them have all the information," Allison said.

In all, 916 current and former NIH researchers are receiving royalty payments for drugs and other inventions they developed while working for the government. They can collect up to $150,000 each a year, but the average is about $9,700, officials said.

In 2004, these researchers collected a total of $8.9 million. Only a dozen received the legal maximum.

The government owns the patents and the scientists are listed as inventors so they can share in licensing deals struck with private manufacturers. In addition to the inventors' take, the government received $55.9 million in royalties for the same inventions and put that money back into research.

Fauci and Lane have each received $45,072.82 in royalties since 1997 when the government licensed the treatment they invented to drug maker Chiron Corp.

Both doctors said they, too, were concerned about the appearance of a conflict of interest since the NIH division they oversee has been spending $36 million to test interleukin-2 on patients.

As a result, they took steps on their own to address the problem while NIH delayed in enacting a policy. For instance, the National Cancer Institute was brought in to independently review and approve the research in advance.

And Fauci tried to give back the royalty money he got from the interleukin-2 treatment and to disclose the payments on his public ethics forms. Both times he was rebuffed by his own agency, which declared he could do neither under the law.

So his only option was to donate all the money he has received since 1997 to charity. "I'm going to give every penny of it to charity ... no matter what the yearly amount is," Fauci said in an interview.

Lane is keeping his royalties, but said he pressed for years for a disclosure policy and occasionally gave interleukin-2 patients scientific journal articles that mentioned he was the inventor on the treatment's patent.

"I believe patients should know everything that might influence their desire to be participants in research," Lane said.

Both acknowledged they were unwilling to tell interleukin-2 patients about the royalties on consent forms until NIH developed its policy. Both will do so from now on.

"We were reluctant to make a formal policy until the broad policy came down from the department and NIH," Fauci explained.

Their case illustrates the gulf between what the government promised nearly five years ago in the midst of controversy and what actually has been done.

Then-Health and Human Services Secretary Donna Shalala pledged in May 2000 that the government would develop policies to require "that any researchers' financial interest in a clinical trial be disclosed to potential participants."

Congress, concerned by reports of conflicts of interest and researchers' conduct in several high-profile experiments, was told the changes would happen. The government first published guidance for the disclosure in January 2001.

Current HHS Secretary Tommy Thompson issued new guidance in May 2004 that again clearly cited "compensation that may be affected by the study outcome" and "proprietary interests in the products, including patents, trademarks, copyrights or licensing arrangements."

NIH, however, didn't order the disclosure until last week's policy.