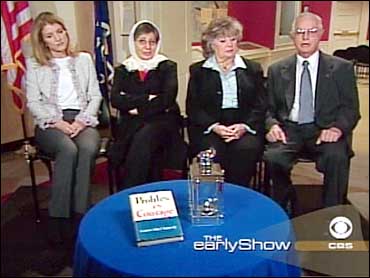 Three elected officials who have shown political courage in the face of strong opposition received the prestigious "Profile In Courage Award" Monday.

The award, named after President John F. Kennedy's Pulitzer Prize-winning book of the same name, was created in 1989 in honor of President Kennedy's commitment and contribution to public service.

Caroline Kennedy tells The Early Show co-anchor Harry Smith "It's really the same spirit that was present in my father's book, which has inspired generations now of Americans to really expect courage in their elected officials. And we want to reward people for doing that. Hopefully, that will encourage more people to stand up and do the right thing."

In selecting a recipient, the Profile in Courage Award Committee considers elected officials who have demonstrated the kind of political courage described in President Kennedy's book, in which he wrote: "The true democracy, living and growing and inspiring, puts its faith in the people - faith that the people will not simply elect men who will represent their views ably and faithfully, but also elect men who will exercise their conscientious judgment - faith that the people will not condemn those whose devotion to principle leads them to unpopular courses, but will reward courage, respect honor and ultimately recognize right."

It's almost a good news/bad news award, because the courage may have cost the honorees their jobs.

"I think we need to reward that kind of courage and bravery and we need more of it. Many people think there aren't a lot of courageous politicians. But in fact, doing the research for this award has really inspired me because there are so many people serving at all levels of government, and I think as Americans, we need to appreciate that," says Kennedy. "The courage we are seeing around the world in government is really inspirational. I think that that's also something that we need to acknowledge."

As a physician working in Afghanistan during the brutal Taliban regime, Dr. Samar actually opened clinics for women. And though she ended up losing her job, she says her efforts were worthwhile in the end.

"I believe in human rights and social justice," she says. "It doesn't matter if I lose my job, I continue the work either I am in that position or not. We need to stand for principles and social justice in this world. The job doesn't matter. It's not a big issue unless we have to keep the belief and keep the courage for the future generation and better future for the people in Afghanistan or in other parts of the world."

When Watson went after these polluters she says she did not know what the outcome would be, but notes it was important to address the issue after listening to the people.

"We were trying in a small area, which the economic impact is tremendous," she explains, "The industry brings a lot of jobs. It does help support a lot of the small business in your community but the waste treatment system of the hog industry was taking away private property rights. And we didn't have clean air to breathe and we began to see some contamination in some of the wells."

Watson brought both sides to Raleigh and bluntly told the protestors that there was nothing wrong with swamp production and told the hog industry the lagoon system had to go.

"So I just addressed the issue and ran legislation," she said, "and then, of course, had a lot of money sent by the industry to take my job."

Muegge had a similar situation in Oklahoma where he ws re-elected by only 60 votes.

"One of the things that people didn't realize was that it was a neighborhood problem they were creating," he said. "This wasn't just a pollution issue. Then it got me into the consideration of how our foods are produced in the modern times and how we're going to deal with this because factory farming is different than the farming that I do on my farm."

Described by one recipient as the "Nobel in Government," the Profile in Courage Award is accompanied by a sterling silver lantern representing a beacon of hope. The lantern was designed by Caroline Kennedy's husband, Edwin Schlossberg, and crafted by Tiffany and Co.