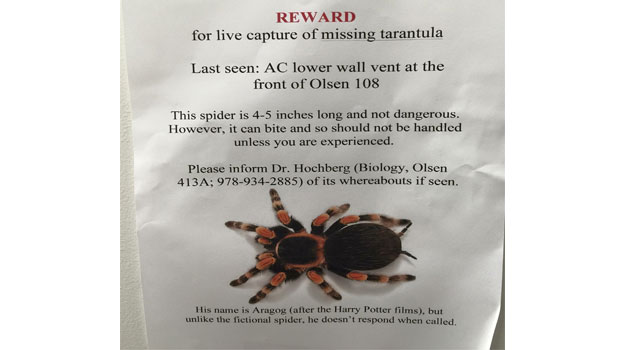 LOWELL -- A professor at a Massachusetts college is asking the campus community to help him find his missing tarantula, reports CBS Boston.

A poster shared around the UMass Lowell campus offers a reward for the live capture of the missing tarantula, affectionately named Aragog, after the Harry Potter films.

"His name is Aragog (after the Harry Potter films), but unlike the fictional spider, he doesn't respond when called," a poster on campus reads.

The poster asks anyone who finds to the spider to contact Dr. Rick Hochberg, an associate professor of biology at the school.

The poster says the spider is 4 to 5 inches long and not dangerous.

The poster also says that anyone who finds the spider should only pick up the tarantula if they are experienced, since it can bite.

Aragog was last seen in a wall vent in a campus building.