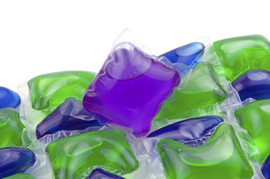 NEW YORK - Procter & Gamble says it's working to stop the "Tide Pod challenge," a social media-fueled trend in which teenagers eat single-load laundry detergent packets. The American Association of Poison Control Centers warned last week that it had seen a spike in teenagers eating the detergent pods, which it says can cause seizures, respiratory arrest and even death.

CEO David Taylor called the trend "dangerous" and "extremely concerning" in a blog post Monday. He said the company is working with social media companies to remove videos of people biting into the detergent, and asked adults to speak with children about the hazards.

P&G has faced safety issues with Tide Pods before. Shortly after it introduced the product in 2012, the company announced that it would create a double-latch lid to deter young children from accessing and eating the detergent packets. Some children mistook the brightly colored 1-inch pods for candy.

The Consumer Product Safety Commission also found that elderly adults with dementia were confused by the product and have also ingested it. But the danger to little kids is so high that researchers have recommended parents of children under six years old not buy the pods at all and instead use regular detergent only.

To deter teenagers, P&G released a 20-seond video of football player Rob Gronkowski earlier this month telling viewers not to ingest the pods.

"What the heck is going on people?" he said in the video. "Use Tide Pods for washing, not eating."