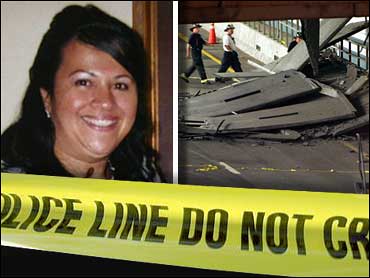 The head of the agency overseeing Boston's Big Dig highway project ordered a review of the entire metro highway system Wednesday after investigators looking into the fatal collapse of concrete ceiling slabs found 60 more questionable areas inside the same tunnel.

There were also trouble spots in the tunnel's westbound lanes, they said.

"We're evaluating each of these individual sites," said. He added, however, "The tunnel system is safe."

There had been plans to reopen the connector tunnel Wednesday, but Amorello said it would remain closed indefinitely to ensure motorists' safety.

Twelve tons of concrete ceiling panels in the tunnel crashed down late Monday night, crushing a car and killing a 38-year-old woman inside. Her husband barely escaped by crawling through a window.

U.S. Attorney Michael Sullivan, whose office has been conducting a yearlong investigation into problems with the massive highway project, told The Associated Press on Wednesday that his investigators are turning their attention to whether contractors involved in that part of the system delivered the goods and services they promised.

"We obviously want to identify any public safety risks ... but also to ensure that what the government paid for, through tax dollars, is in fact what was delivered," Sullivan said.

The woman's death could also lead to charges of negligent homicide, said Massachusetts Attorney General Tom Reilly, who is treating the section of eastbound Interstate 90, near the entrance of a connector tunnel to Logan Airport, as a crime scene.

Amorello has said a steel "tieback" that held a 40-foot section of ceiling panels gave way, letting the concrete slabs loose as the car drove beneath it.

He and Michael Lewis, project director for the Big Dig, told reporters Wednesday that inspectors had also discovered some bolts were starting to come from that tunnel's concrete ceiling, and that in other locations there were gaps between the ceiling and a metal plate holding the 3-ton panels in place.

The Big Dig, started in 1991, was the most expensive highway project in U.S. history. It buried Interstate 93 beneath downtown and extended the Massachusetts Turnpike to the airport. It also gained nationwide notoriety for its soaring costs, years of traffic snarls, the criminal investigation into the concrete suppliers and problems with leaks that sprouted in another of the Big Dig tunnels.

Sullivan's office brought the first criminal charges related to the Big Dig project in May, accusing six men who worked for its largest concrete supplier of falsifying records to hide the inferior quality concrete.

The section of tunnel ceiling that collapsed was near the entrance to the Ted Williams Tunnel, which runs under Boston Harbor to the airport. That segment of the tunnel was completed in 1995-96, but the ceiling panels were installed in 1999.

"Obviously, there was a failure in either quality control, design or construction," he told the newspaper. "We cannot allow people to go back in these tunnels until we know they're safe."

Andrew Paven, a spokesman for project manager Bechtel/Parsons Brinckerhoff, said the company was working with the Turnpike Authority to pinpoint the cause and to prevent future accidents.

Late Monday, Angel Del Valle, 46, and his wife, Melina, were driving to the airport to pick up relatives when four of the massive concrete ceiling panels hit their car.

"It was like a bomb," Angel Del Valle told the Boston Herald. "Everything was falling. It was too fast. I couldn't stop. I couldn't do anything."

His wife was on the passenger side, which bore the brunt of the damage. There was no way to pry open that door, he said. "I wanted to do the impossible."

Gov. Mitt Romney pinned much of the blame on the Massachusetts Turnpike Authority and promised to take legal action to oust Amorello, who he has long criticized for his oversight of the turnpike authority, a quasi-public agency that was intended to be independent of the governor.

"People should not have to drive through the Turnpike tunnels with their fingers crossed," the governor said.