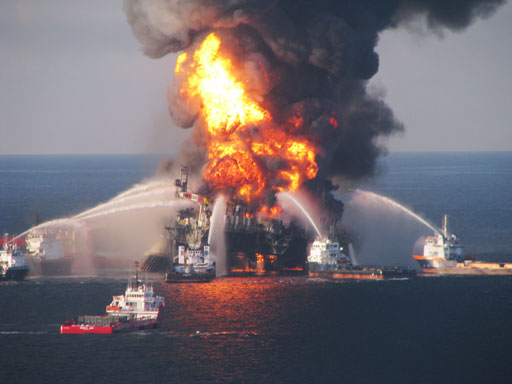 NEW ORLEANS - A federal probe has found that a trapped piece of drill pipe prevented a key failsafe device from properly sealing off the blown oil well that caused last year's massive BP Gulf oil spill, according to a report released Wednesday.

The 551-page report said the device, known as a blowout preventer, failed to work properly because the piece of drill pipe kept its blind shear rams from sealing the well around the time of the April 20 oil rig explosion off the coast of Louisiana. Shear rams are components in a blowout preventer that cut, or shear, through drill pipe and form a seal against well pressure.

The Norwegian firm hired by the government to test the blowout preventer said the way the drill pipe was positioned within the wellbore caused it to buckle and bow when the well lost control, impeding the rams.

Det Norske Veritas's report does not assign blame to any one company, but does find fault with the performance and design of the blowout preventer. The device was made by Cameron and maintained by Transocean Ltd.

The firm made several recommendations for the industry in its report, including changing the design of blowout preventers.

Blowout preventers sit at the wellhead of exploratory wells and are supposed to lock in place to prevent a spill in case of an explosion.

The 300-ton device that was used with BP's Macondo well was raised from the seafloor Sept 4. Testing began at a NASA facility in New Orleans in November.

The official testing ended earlier this month. BP has asked a federal judge for permission to conduct additional testing on its own. Cameron has objected, saying that if further testing is done, a neutral third-party should do it.

The investigation into what caused the rig explosion and oil spill is being overseen by a joint U.S. Coast Guard-Bureau of Ocean Energy Management Regulation and Enforcement panel.