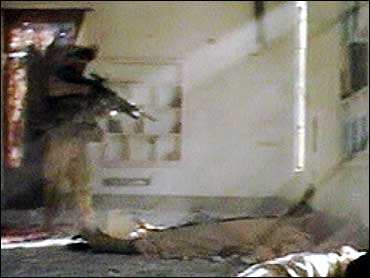 A spokesman for the U.S. Marines says an investigation is underway into a videotaped incident in a Fallujah mosque, in which pool television pictures broadcast Monday appear to show a Marine shooting and killing an already captive and wounded Iraqi prisoner.

U.S. military officials say the Marine seen firing the gun in the videotape has been withdrawn from the battlefield pending the results of an investigation into whether he acted in self-defense, violated military law or failed to comply with the laws of armed conflict.

The shooting Saturday was videotaped by pool correspondent Kevin Sites, who said three other previously wounded prisoners in the mosque apparently were shot again by Marines inside the mosque.

CBS News Correspondent Wyatt Andrews reports that the tape shows a squad of Marines finding a room of wounded insurgents inside a mosque, which was a former insurgent stronghold and was believed by Marines to be the source of heavy enemy fire.

It turns out the insurgents were unarmed - left in the mosque by a previous squad of Marines to await medical evacuation, Andrews reports. But the second squad did not know that. Commanders had not evacuated the wounded because U.S. troops were still under fire.

"If the Marines are engaged in combat operations still, then it's not prudent for the commander to pull out his Marines from contact to render aid such as evacuating enemy wounded," explains Lt. Bob Miller, Staff Judge Advocate of the 1st Marine Division.

The blacked out portion of the videotape is reported to show the bullet striking the man in the upper body, possibly the head. His blood splatters on the wall behind him and his body goes limp.

The incident played out as the Marines 3rd Battalion, 1st Regiment, returned to the unidentified Fallujah mosque Saturday. Sites was embedded with the unit.

Sites reported that a different Marine unit came under fire from the mosque Friday and those Marines stormed the building, killing ten men and wounding five others. The Marines said the fighters in the mosque had been armed with rocket-propelled grenades and AK-47 rifles.

The Marines had treated the wounded, he reported, left them behind and continued on Friday with their drive to retake the city from insurgents who have been battling U.S.-led occupation forces in Iraq with increasing ferocity and violence in recent months.

Sites reported a Marine in the same unit had been killed just a day earlier as he tended to the booby-trapped dead body of an insurgent.

The Marine shown firing the gun in the mosque videotape is in custody now as authorities investigate whether the shooting was a criminal act.

The events in the video began as some of the Marines from the unit accompanied by Sites approached the mosque on Saturday, a day after it was stormed by other Marines.

Gunfire can be heard from inside the mosque, and at its entrance, Marines who were already in the building emerge. They are asked by an approaching Marine lieutenant if there were insurgents inside and if the Marines had shot any of them. A Marine can be heard responding affirmatively. The lieutenant then asks if they were armed and a fellow Marine shrugs.

Sites' account said the wounded men, who he said were prisoners and who were hurt in the previous day's attack, had been shot again by the Marines on the Saturday visit.

The videotape showed two of the wounded men propped against the wall and Sites said they were bleeding to death. According to his report, a third wounded man appeared already dead, while a fourth was severely wounded but breathing. The fifth was covered by a blanket but did not appear to have been shot again after the Marines returned. It was the fourth man who was shown being shot.

A spokesman at Marine Corps headquarters in the Pentagon, Maj. Doug Powell, said the incident is "being investigated." He had no further details, other than to confirm the incident happened on Saturday and that the Marines involved are part of the 1st Marine Division.

At the request of the military, the name tags and backpack IDs, as well as the faces of Marines in the video, have been obscured by news organizations showing the video - to prevent identification of the Marines in question while the investigation is in progress.