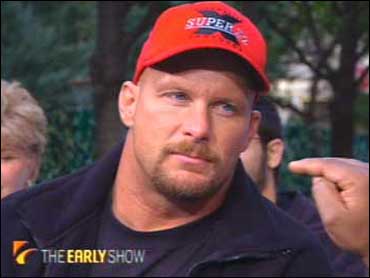 The wife of "Stone Cold" Steve Austin has accused the wrestling star of beating her after a weekend argument at their home in an upscale neighborhood of San Antonio, police said Monday.

Debra Williams, also a professional wrestler, called police to the couple's home Saturday night and told officers that Austin had beaten her on the head, back and legs then stormed out of the house before police arrived.

Austin called the house while officers were there and was told he was in trouble, according to a police report. Austin told them he understood, but declined a request to return to the house or report to the police station, the report said.

Williams has not filed a formal charge, so Austin is not considered a fugitive, according to Sgt. Gabe Trevino. Williams was not hospitalized after the alleged assault.

Austin, a native Texan and former North Texas State University football player began wrestling professionally in 1992 and is one of the leading stars of World Wrestling Entertainment Inc., formerly known as the World Wrestling Federation.

World Wrestling Entertainment spokesman Gary Davis said Austin recently failed to appear at two scheduled performances, one in Montreal and one in Austin, Texas, describing the no-shows as an "unacceptable violation of his contract."

Davis said Austin was apparently dissatisfied with the way his character was being developed for WWE shows.