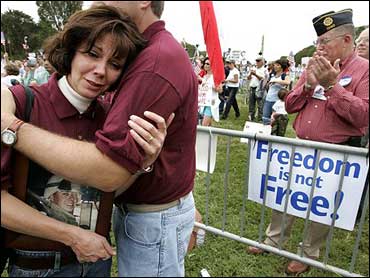 Support for U.S. troops fighting abroad mixed with anger toward anti-war demonstrators at home as hundreds of people, far fewer than organizers had expected, rallied Sunday on the National Mall just a day after a massive protest against the war in Iraq.

"No matter what your ideals are, our sons and daughters are fighting for our freedom," said Marilyn Faatz, who drove from New Jersey to attend the rally. "We are making a mockery out of this. And we need to stand united, but we are not."

About 400 people gathered near a stage on an eastern segment of the mall, a large patchwork American flag serving as a backdrop. Amid banners and signs proclaiming support for U.S. troops, several speakers hailed the effort to bring democracy to Iraq and Afghanistan and denounced those who protest it.

Many demonstrators focused their ire at Cindy Sheehan, the California woman whose protest near President Bush's Texas home last summer galvanized the anti-war movement. Sheehan was among the speakers at Saturday's rally near the Washington Monument on the western part of the mall, an event that attracted an estimated 100,000 people.

"The group who spoke here the other day did not represent the American ideals of freedom, liberty and spreading that around the world," Sen. Jeff Sessions, an Alabama Republican, told the crowd. "I frankly don't know what they represent, other than to blame America first."

One sign on the mall read "Cindy Sheehan doesn't speak for me" and another "Arrest the traitors"; it listed Sheehan's name first among several people who have spoken against the war.

Melody Vigna, 44, of Linden, Calif., said she wants nothing to do with Sheehan and others at nearby Camp Casey, an anti-war site set up to honor her son, Casey, who was killed in Iraq.

"Our troops are over there fighting for our rights, and if she was in one of those countries she would not be able to do that," Vigna said.

The husband of Sherri Francescon, 24, of Camp Lejeune, N.C., serves in the Marine Corps in Iraq. One of the many military wives who spoke during the rally, Francescon said that the anti-war demonstration had left her frustrated.

"I know how much my husband does and how hard he works, and I feel like they don't even recognize that and give him the respect he deserves," Francescon said. "I want him to know and I want his unit to know that America is behind them, Cindy doesn't speak for us, and that we believe in what they are doing."

Organizers of Sunday's demonstration acknowledged that their rally would be much smaller than the anti-war protest but had hoped that as many as 20,000 people would turn out.

On Saturday, demonstrators opposed to the war in Iraq surged past the White House in the largest anti-war protest in the nation's capital since the U.S. invasion. The rally stretched through the night, a marathon of music, speechmaking and dissent on the mall.

National polls have found steadily declining support for the war in Iraq, with a majority of Americans now believing the war was a mistake.

In an AP-Ipsos poll this month, only 37 percent approved or leaned toward approval of how Bush has handled the situation in Iraq; strong disapproval outweighed strong approval by 2-1, 46 percent to 22 percent.