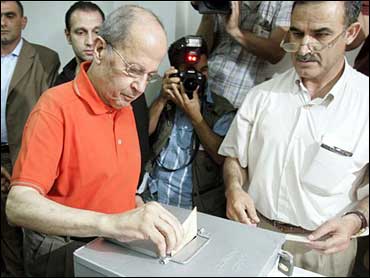 Aoun's success could hurt the opposition's drive to gain a majority in the legislature, and a strong showing could leave him a key player in the fight over Syrian control. An empowered Aoun could deny the anti-Syrian opposition a majority and put brakes on their campaign to remove pro-Syrian President Emile Lahoud.

Jumblatt accused Aoun, a former military commander and fierce anti-Syrian who returned from 14 years' exile in May, of being brought in by the Syrians to undermine the opposition.

"Michel Aoun is a small (Syrian) tool," he said. "True he succeeded, I concede that."

In his first comments, Aoun said he was willing to talk with other factions in the new parliament and if there were no agreement he and his allies would be in opposition "carrying out our duties." He said the priorities of his Free Patriotic Movement, which has waged an anti-corruption campaign, would be to work for a new election law, shorten the mandate of parliament's four-year term and demand the government carry out a financial audit.

With no official results expected before at least midday Monday, preliminary results and campaign estimates showed Aoun and his allies leading in several districts in Mount Lebanon and in the eastern Bekaa Valley. In some areas, his allies were already celebrating with fireworks.

The fiercely contested vote in central and eastern regions is deciding nearly half the legislative seats up for grabs in the country's four-stage elections, and could determine whether it finally shakes off Syria's domination.

Anti-Syrian forces needed a strong showing - at least 45 seats for a majority - to win a firm grasp on Parliament and wean it of Damascus' control. But the campaign, which ends June 19 with voting in the north, has led to some surprising alliances, and many races are too close to call.

The withdrawal of Syria's army from Lebanon in April, and subsequent jockeying for power, fractured some of the longstanding pro- and anti-Syrian political alliances. In some districts, anti-Syrians are running against anti-Syrians, with each side forging electoral alliances with pro-Syrians in hopes of a win.

Aoun challenged tickets backed by Jumblatt, a Druse who also forged alliances with pro-Syrian factions including the Shiite Muslim Amal and Hezbollah groups.

Jumblatt acknowledged the anti-Syrian camp had lost Zahle, the provincial capital of the Bekaa.

"We lost Zahle. I hope we will not lose the north," he said.

The north votes June 19, in the last stage of four-part elections.

Aoun was leading in the Christian heartland of Metn and Kesrwan-Byblos, according to unofficial results by Aoun and his allies.

One of Aoun's allies, Michel Murr, has already declared victory in Metn. Jumblatt did not refer to that region in his comment.

However, a race in the Baabda-Aley district of Mount Lebanon between Aoun's ticket and Jumblatt's - the fiercest in Sunday's balloting - remained too close to call.

Unofficial turnout tallied by media and various campaigns put the turnout at a relatively high 54 percent in Mount Lebanon and 49 percent in the Bekaa.

Sunday's election was a battle among the Lebanese, this time by ballot and not bullet, in mountain towns overlooking the Mediterranean that were the scene of vicious combat during the 1975-90 civil war, and in farming communities in the Bekaa inland near the Syrian border.

The vote, the first since Syrian forces withdrew from Lebanon after 29 years, was largely peaceful despite some minor scuffles.

In Souk el-Gharb, where Christian forces fought bloody battles with the Druse in the 1980s, residents were delighted by the peaceful competition.

"For me, ballot box battles are for sure much better than gun battles," said Shahine Salibi, a 65-year-old Christian grocer.