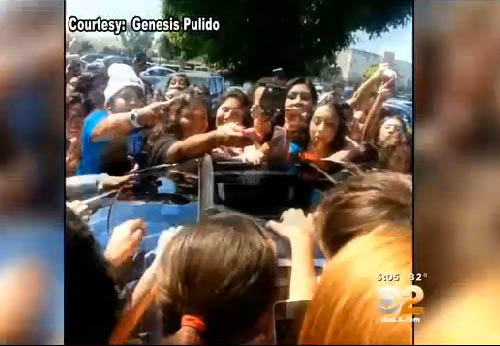 DOWNEY - A Southern California mall was shut down Saturday as police attempted to calm a crowd of 2,000 teenagers arriving to see two professional skateboarders scheduled to appear at a local clothing store, reports CBS LA.

Stonewood Center shopping mall in Downey, about 10 miles from Los Angeles, was swarmed with fans of professional skateboarders Steven Fernandez, 15, and Keelan Dadd, 27. Downey police say hundreds converged inside the shopping center while thousands formed a line outside its doors, reports the station.

Fernandez and Dadd were scheduled to appear Saturday afternoon at the Zumiez store but Downey police said the event had to be cancelled due to the crowds.

"The clothing store and event staff were overwhelmed with the large crowd inside the mall, which caused the business to close their doors and cancel the event," Lt. Brian Baker stated.

Patrons were escorted out by police and local law enforcement agencies.

There were no reports of any injuries or arrests and no significant damage to property, according to Baker.