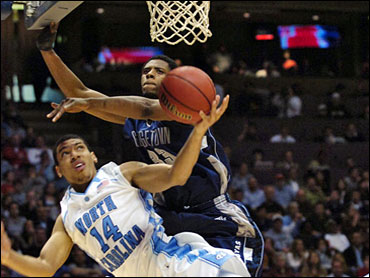 This column was written by Neal McCluskey.

Almost the instant last Sunday's final Elite Eight game ended, sportswriters started pounding out terms like "powerhouses" and "titans" to describe the teams remaining in this year's NCAA basketball tournament. On the court, all four surviving schools — the University of Florida, UCLA, Ohio State, and Georgetown University — are indeed powerhouses. When it comes to athletics overall, however, one is no Goliath. Georgetown is a David, a private school with none of the advantages its gigantic public foes get from compulsory taxpayer support.

According to the U.S. Department of Education, in the 2005-06 school year Georgetown spent only about $24 million on athletics, while UCLA spent more than $52 million, Florida over $78 million, and Ohio State nearly $102 million. What accounts for the big gap? Largely that, unlike its Final Four opponents, Georgetown doesn't play major college football — which requires big expenditures, but also provides some of the biggest profits to schools able to undertake it.

Now, fans of big state universities will argue that playing football is no unfair advantage, and that you have to be willing to invest in sports to win. Moreover, they'll point out that none of the funding their colleges provide for their football or basketball comes from taxpayers. No, their schools have worked hard to cultivate boosters, pursue corporate sponsors, and bring in fans.

For the most part, these claims are true. But for public universities, there's an extra man on the field: Because state taxpayers pick up a lot of public schools' costs — 62 percent of public schools' general operating funds in FY 2006, according to State Higher Education executive officers — state universities can charge greatly subsidized tuition and attract the huge student bodies necessary to create massive fan and donor bases. Moreover, spending taxpayer dollars on academics frees donors to focus more of their money on sports.

Private schools, which must rely on tuition and donations to pay for most things, both academic and athletic, have no such advantages.

It is in facilities — which are often crucial for enticing good recruits to come to a school, as well as to generate revenue — that the flagship advantage is most obvious.

Georgetown's on-campus basketball home, McDonough Gymnasium, is a 1951 relic that seats only 2,500 people. Their stadium is too small to host most games, so the Hoyas are forced to rent out downtown D.C.'s Verizon Center. It's a nice arena, but it's also the home of Washington's NHL, NBA and WNBA franchises, rendering GU a rent-paying tenant rather than a home-court owner, and a very low-level tenant at that.

All of GU's Final Four competitors, in contrast, own their arenas and play on campus. UCLA's Pauley Pavilion opened in 1965 and seats nearly 13,000 fans. Florida's Stephen C. O'Connell Center started operations in 1980 and accommodates roughly 12,000 spectators. And then there's Ohio State's Value City Arena at the Jerome Schottenstein Center, which opened in 1998 and seats nearly 20,000.

Again, State U fans will assert that if you want to win you have to invest, and good facilities are one such investment. But the same rejoinder applies: Big state schools get the booster support they need to erect new facilities in part because taxpayers cover the academics. And that's not the end of it: Some of the funds used to build the basketball homes of Georgetown's Final Four competitors came directly from taxpayers.

According to UCLA's athletics Web site, Pauley Pavilion was built in the early 1960s with at least $2 million — equivalent to about $13 million today — coming directly from taxpayers. Worse yet, while its Web site says that "no major public funding" was used to build the Schottenstein Center, it did mention that the state shelled out $15 million "for an initial design study."

Apparently, $15 million is nothing "major" for the people of Ohio. For a school like Georgetown, though, it would be a very major chunk of any year's athletics budget.

All this said, don't feel too sorry for private colleges and universities. They benefit from lots of pork projects and government subsidies themselves, so they're getting more than enough taxpayer money. But as you watch the Final Four this weekend, you might still want to cheer a little bit extra for the Georgetown Hoyas, because not every titan, it turns out, is as big as the others.
By Neal McCluskey
Reprinted with permission from National Review Online