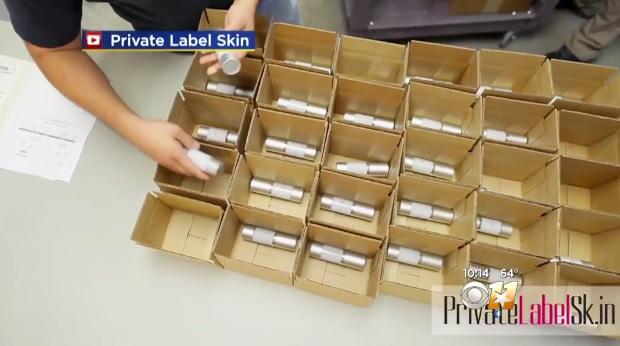 Joanna Gaines, Angelina Jolie, Christie Brinkley and others -- each starting their own line of anti-aging products. The articles are "fake news," designed to get you to click on links for free trials of beauty cream.

But thousands of customers say they didn't know they were also being enrolled in costly monthly subscriptions, CBS Dallas/Fort Worth reports.

The station's Consumer Justice team first reported on the free trials in March, investigating how many of the sites violated the "negative option" law by hiding the terms and conditions. Since then, they've heard from hundreds of customers in 30 states and Canada. All of them say they signed up for a free trial, agreed to pay shipping, then later found large charges on their bank or credit card statements -- sometimes hundreds of dollars. The charges would continue each month until customers cancelled the service.

Officials with the West Florida BBB say they have linked Private Label Skin/Hashtag Fulfillment to more than 500 beauty creams. "This office alone has received over 4,000 complaints on the various product lines fulfilled by Hashtag Fulfillment," said BBB spokesman Bryan Oglesby. "So we met with the company and asked them to address the underlying cause and pattern of complaints. The company's response is that they do not market these product lines, they just fulfill the orders."

The West Florida BBB asked Private Label Skin executives to hand over contact information for the businesses selling the creams, but say company officials refused to do so, saying it would violate their contracts with clients.

Oglesby said Private Label Skin and Hashtag Fulfillment are "well aware" of how the beauty creams are being marketed to consumers, and that there are likely thousands more unhappy customers out there. "Complaints to us are only going to make up a small portion of what the general population is dealing with."

"A gray area" for online sales

CBS DFW wanted to see how much Private Label Skin knew about its clients' selling tactics, so they had Joe Youngblood, a digital marketing expert, call the company to see what they would say. He spoke to Beau Burke, head of business development, who touted the company as a one-stop shop for manufacturing, label design, packaging and shipping. Burke told Youngblood that there were two ways to sell: straight sale or negative option. He said most of his clients run free trials, calling it a "huge market" that is "easy to monetize," but warning that it is "a gray area." Burke said most of his trial guys like to "fly under the radar" to "stay away from publicity and the FTC."

Youngblood later introduced Burke to Kelsy, a Consumer Justice producer, who set up a tour of the Private Label Skin facility in St. Petersburg. Kelsy went in and met with Burke, who right away began discussing the free trial market. "They're telling you how to do it, what it takes to do the free trials, to run the negative option billing," said Kelsy.

Burke also stressed the importance of hiring a call center. He said the call center would deal with unhappy customers and "make them feel heard" so they would not file a dispute with their bank or credit card company. Call center employees would also reach out to people who had filled in their name and phone number for a free trial, but not their credit card information, in hopes of convincing those people to complete the purchase.

Burke told Kelsy, "if your business grows too big, too fast, it could draw too much attention from the FTC," and that a good goal is 400 sales a day. Burke advised that if a business gets shut down, "you can just rebrand and start over."

Kelsy then went on a tour of the facilities with a salesman. First they ran into Private Label Skin's president, Eric Pogue. He was friendly and welcoming. The salesman told him Kelsy was "thinking of doing free trials." Pogue said, "Some people wrestle with that," but did not explain further.

When Kelsy was there she was told the online articles about celebrities starting beauty cream lines were "fake news," and "on Facebook you're always one or two steps from a free trial." The stories are designed to get people to click on a link leading to a "landing page." Many of the free trial landing pages look extremely similar, with the same photos, wording and testimonials, but featuring different products.

Kelsy was also taken to the fulfillment center, a massive warehouse where the creams and other health and beauty products are packaged and shipped. "It's a huge operation… I mean thousands and thousands of tubes and creams and everything," said Kelsy. She was told they ship a product every 30 seconds, seven days a week, and the company is on track to make $100 million this year. She was also told how the company had moved into the warehouse to get more space to handle the high volume of sales.

Next they visited the lab where the beauty cream is manufactured and bottled. Undercover video shows rows and rows of tubes and bottles on conveyor belts, being labeled and filled. A chemist works in a nearby office, testing different formulations of creams, serums, and sprays.

Along the way Kelsey was told how the beauty cream companies charge their customers. Many of the websites will offer a second product as a "gift" after customers sign up to receive one cream. Kelsy was told that the companies would ship the products together to save on shipping costs, but bill for the products separately in hopes that customers would not notice the charges. In many cases the charges are not round numbers, like $90 or $100, but amounts like $89.53 or $98.72 to blend in with other charges on the customer's statement. She was told that the companies would bill on different days, so the charges would not show up next to each other on the statement.

Chargebacks were also discussed, with most companies preferring to give a refund than fight a chargeback, because even if the credit card processor sides with the company, it's still a "ding" on their account. He said once a company gets too many chargebacks, the creditor will freeze or close the account.

But if you get shut down, Kelsey was told, Private Label Skin will help you start over. The company would take the unsold bottles of cream and relabel them with a new name. She was told that one client shuts down his free trial every six months and starts over with a new name, to avoid getting too many complaints or chargebacks. She was told that the goal is not to build a brand but to build a business, because the brand will likely have to keep changing.

After the tour, CBS DFW's Cristin Severance approached Burke about the creams and the complaints on camera, but he had no comment. Private Label Skin declined a request for an on-camera interview and later emailed a statement, saying, in part that they don't sell directly to consumers, and that "[t]he Better Business Bureau has mistakenly applied many of these consumer complaints to us, instead of the actual retailers that sold them the products." (The full statement is reprinted below.)

The BBB says they've fulfilled a request by the FTC to hand over their investigation files. The Florida Attorney General's Office also told us it is investigating.

We do not sell products directly to consumers. The companies who hire us to manufacture and/or fulfill their products do that. Those companies also do their own advertising and marketing, as well as the product sales and collections of funds.

When consumers do have a complaint about one of the brands, they may reach out to us, as we handle returns, even though their complaint is with the company that they purchased the product from. Once we become aware, we assist the consumer by putting them directly in touch with the companies to resolve their issues.

The Better Business Bureau has mistakenly applied many of these consumer complaints to us, instead of the actual retailers that sold them the products. We have attempted to work with the BBB and sent them a lengthy and detailed document nearly a year ago explaining how we could join forces with them to better resolve any complaints consumers have with the retailers. For some reason, the BBB decided to continue to blame Hashtag Fulfillment for complaints that consumers have against other businesses.

This makes no sense to us since we do not take any retail orders, process retail consumer payments, operate customer service departments for retail consumers, operate or design retail websites, or assist any wholesale buyers develop retail sales programs. These areas are solely maintained by the brands themselves.

Although we ship out thousands of packages every day on behalf of different retailers, there are actually only nine current complaints against Hashtag Fulfillment noted in the BBB website. In each instance, we have responded, correcting the consumer's misconception.

We are a good, local employer committed to ethical business practices and treating people right. We are sympathetic to anyone who feels taken advantage of while purchasing goods through online media and are working to strengthen regulations that protect consumers. We are fully committed to consumer trust and confidence in any purchases made though anyone of our customers.

If you've been wrongly charged for a free trial offer, you can file a complaint with the FTC here.

Or contact your local chapter of the Better Business Bureau.