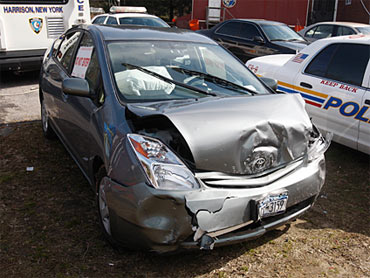 Police say a New York woman who claimed her 2005 Toyota Prius accelerated on its own was on her way to have its gas pedal checked at the time of the accident.

Harrison police Capt. Anthony Marraccini said Thursday the driver had not experienced previous problems with acceleration. But he says she had arranged a check because of publicity about sticky gas pedals.

The driver, a 56-year-old housekeeper, told police she was easing down her employer's driveway north of New York City on Monday when the car began to speed up. She said she did not know whether the gas pedal stuck.

She says that she applied the brakes but that the car lurched across two lanes of traffic and into a stone wall. She was not seriously injured.

The crash caught the attention of federal regulators Wednesday as it heightened the attention surrounding unintended acceleration in Toyota vehicles and a recall involving more than 8 million vehicles to address gas pedals that can become sticky or trapped under floor mats.

The Department of Transportation is looking into the New York crash, spokeswoman Olivia Alair said Wednesday.

Marraccini said Wednesday that a regional Toyota official asked to collect the Prius involved in the crash but that the police were "not prepared to release it just yet."

He said he wanted to see first if a federal agency wants to join or take over the investigation. "This involved potentially a great safety hazard and could be something of national interest," he said. Besides, he said, the damaged car belongs to the owner, not to Toyota.

When police release the Prius, Toyota will evaluate it to determine the cause of the accident, company spokesman Brian Lyons said.

The silver-gray Prius was taken to a police parking lot. Its front end was severely pushed in, the hood was buckled and the front bumper and one front headlight were broken.

The Prius is not on Toyota's recall list for the sticky accelerator problem; however, the 2005 Prius is listed in the car company's recall of floor mats from pedal entrapment.

The vehicle had been serviced by Toyota for the floor mat problem, Marraccini said.

The driver was going forward in the car on Tuesday, down a curving driveway several hundred feet long with a putting green next to it, when the accident happened, Marraccini said.

"She said she doesn't know whether the accelerator stuck," Marraccini said. "She said she didn't depress it that much because she was just pulling out of the driveway."

Local Video from CBS 2 HD in New York
He said she was lucky to escape serious injury because she could have driven into traffic and the impact with the wall "was pretty substantial." he said police did not yet know how fast the car was going.

The captain said police would consider the possibility that the driver, whose name was not made public, was at fault. But he added, "She appears to have all her faculties. She didn't appear to be disoriented in any way. There's nothing at this particular time that would indicate driver error."

The air bags deployed when the car hit the stone wall of the estate across the street. On Wednesday, five boulders and smaller filler stones were strewn about, some of them 10 feet from the wall. Broken glass, plastic headlight pieces and metal that looked like part of a window frame were nearby.

Toyota is fighting fears that the crashes are caused by faulty electronics rather than by mechanical problems.

All 2004-2009 Priuses are covered by a recall Toyota announced in October over floor-mat entrapment. Toyota has advised drivers of the Prius and other affected vehicles to take out any removable driver's floor mat until they are repaired.