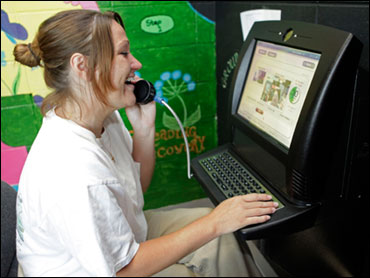 (AP Photo/Michael Conroy)
Candace McCann, an inmate at the Rockville Correctional Facility in Rockville, Ind., talks to her aunt from her prison unit.

MIAMI (CBS/AP) There's still no place like home, but for the prison population, "being there" on the Web is becoming the next best thing. And prison officials say "video-conference visitation" offers benefits for inmates, family, and friends.

Almost every Saturday at 9:30 a.m. Candace McCann, inmate No. 188342, sits down for a scheduled video conference with her daughter.

Seven-year-old Kashmir appears from McCann's aunt's home, three hours away. Sometimes Kashmir draws a picture. Other times she stands on a chair to model an outfit: jeans and a Hannah Montana T-shirt or new shoes. Lately she's been pressing her face close to the camera and opening her mouth, showing off lost teeth.

"I feel like I'm at home, kind of," said McCann, 24, in a video conference interview. "It's good to see that kind of stuff."

Home for McCann right now is a medium-security Indiana prison, where she is serving almost three years for theft and forgery. She has only seen her daughter in person three times in the last year.

But in February, the 1,200 inmates at the prison got the ability to video conference using ATM-like kiosks. Families and friends can talk from the comfort of a home office or an armchair. All they need is a webcam.

Other prisons around the country offer video visits, but families generally have to go to a site like a church to use it. At Indiana's Rockville Correctional Facility, however, once visitors are on an approved list, they can go online from home or elsewhere and schedule and pay for their own visits. Visits cost $12.50 for 30 minutes, less than the approximately $15 the prison charges for a 30-minute local call.

Only the Rockville facility is currently using the system, developed by a Florida company called JPay. But all 28,000 Indiana inmates are expected to have access to the system within the next four years. And all Kansas inmates — just under 9,000 of them — will be able to use it by next year. JPay covers the cost of the kiosks and their installation. The states pay nothing. 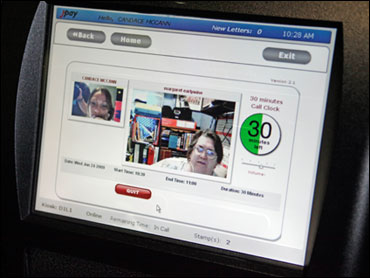 (AP Photo/Michael Conroy)
Using ATM-like kiosks developed by a Florida company, inmates at the Rockville facility are among the first whose families can link up with them from home.

Prison officials say the virtual visits can be less expensive and less time-consuming for families than driving to a faraway prison.

McCann's mother, for example, underwent treatment for cancer and her aunt breathes with the assistance of oxygen.

McCann's aunt, Margaret Earlywine, 69, said visiting her niece in person requires packing four canisters of oxygen and can be stressful.

"When they (prisoners) have that contact with the outside family they actually behave better here at the facility," said Richard Brown, Rockville's assistant superintendent.

And there's no chance inmates can get drugs or other contraband slipped to them.

Not everyone has behaved during the visits, however. In the past few months, a handful of inmates and family members have been banned from using the system for exposing themselves during a visit. The prison watches all the visits either live — like a security video — or later, when the system archives them. If there's a problem, JPay can ban a family member or an inmate from the visits, though after the first offense inmates can get the privilege back in six months.

The prison can block visits at times when inmates have to be at meals or in bed. Inmates get notified they have a visit when they log in to the JPay kiosk. The kiosk has a screen where they can see video, a video camera to record them, and a phone they pick up to listen to the other person. It also has a keypad and built-in mouse.

The same kiosk lets inmates send and receive e-mails, something a third of federal prisons also now offer, and doubles as an ATM machine to tell them how much money they have in their accounts for spending at the prison commissary. Many inmates log in daily, even if just for a minute or two. And at Rockville, which has about one kiosk for every 75 inmates, the wait to use one is rarely long.

Inmate Deborah Reagin, 48, said her video visits have given her a chance to feel like she's still nearby. Her daughters, Amber and Michelle, have taken her on video tours of their new homes, both purchased after she went to prison on a methamphetamine charge. Her 3-year-old grandson Khelin likes to dance for her to the song "I Like to Move It" from the movie "Madagascar." And on Christmas, she watched him play with new toy trucks and bounce on a new trampoline.

"It makes my day a whole lot better to be able to see my family, to talk to them," Reagin said.

She even gets to see her rat terrier, Peaches, who is living with her daughter Michelle.

"Of course they don't allow dogs in this facility," Reagin said, "I would never get to see her if it weren't for these visits."

Even so, prison video conferencing has its limitations. Conjugal visits seem beyond the reach of the new technology.