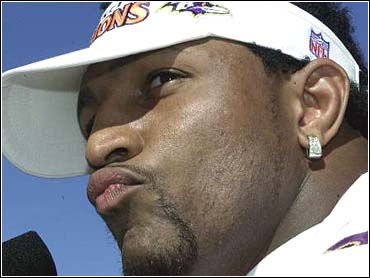 A year ago, Ray Lewis was wearing handcuffs and an orange prison jumpsuit. Tuesday, he wore a diamond-encrusted watch and a white Baltimore Ravens jersey.

Other than the change of outfits, Lewis kept insisting he was the same man.

A midday sun hovered over his left shoulder as he took a seat in front of several hundred reporters. He put an expensive pair of sunglasses down in front of him, folded his hands and for an hour, calmly deflected every question that wasn't about football.

"I'm not here to justify what went on," Lewis said. "That's a story in my book that's closed."

Tuesday was media day at the Super Bowl. It's the day the National Football League normally revels in, but one officials have dreaded since it became apparent Lewis was talented and determined enough to get the Ravens to the championship game.

It's a day set aside for uncovering the personal stories of triumph and tribulation that converge in the finale. Lewis' journey from last January to this one featured more adversity, more twists, turns and tragedy than all the other players' stories laid end to end.

But he wasn't going to talk about it. It's easy to understand why.

In the early morning hours after last season's Super Bowl in Atlanta, two young men were stabbed to death outside a nightclub just miles from the stadium. As chaos reigned, Lewis, several friends and a half-dozen hangers-on piled into a limousine Lewis had chartered and fled.

Long considered one of pro football's best players, he was charged in the murders, then exonerated several weeks later. Under an agreement with prosecutors, Lewis pleaded guilty to misdemeanor obstruction of justice and testified against his two former co-defendants.

He recalled on the witness stand how one, Joseph Sweeting, brandished a knife as they sped away in the limo and made punching motions with it. "Every time they hit me," Lewis quoted Sweeting as saying, "I hit them."

Even so, Sweeting and the other co-defendant, Reginald Oakley, were acquitted of all chares in June. Lewis got a year's probation. No one was convicted of the deaths of Jacinth Baker and Richard Lollar.

Even now, Lewis remains unrepentant. He is convinced prosecutors dragged him into the case because of his high profile and that the NFL tried to make an example of him because several other players were facing felony trials alleging murder and sexual assaults.

"It was never about those two kids lying dead in the street," Lewis said. "It was about Ray Lewis, and that's not right. Don't be mad at me because I'm at center stage."

He has occupied center stage now for the better part of a month. Lewis gave a lengthy interview and appeared on the cover of ESPN's magazine several weeks ago, just as the Ravens began their improbable run through the playoffs.

In the story, he talked about days spent weeping in his cell, struggling to explain to his young son why he always showed up on TV wearing the jumpsuit and handcuffs. Every night, he did 1,500 push-ups and 500 sit-ups in his cell to get ready for this season.

The panther engraved the length of Lewis' left biceps, its long claws colored blood red, attested to that dedication. The defensive player of the year award he picked up earlier this season confirmed his status as the leader of a defense that ranks among the NFL's best of all time.

"The guys in the white jerseys out here," Lewis said, talking about his teammates scattered around the field, "look to me for passion, for a sense of respect."

But the surviving family members of the two young men murdered that night in Atlanta look at Lewis and want to see other things; mostly, a sense of regret.

As Lewis held court inside Raymond James Stadium in Tampa, 41-year-old Cindy Lollar-Owens, the aunt who raised Richard Lollar from a 2-day-old baby, was visiting his gravesite in Akron.

"I didn't get a chance to watch him on TV," she said. "But somebody is going to call us and tell us what he said. I would have given anything to be there."

And yet, Lollar-Owens would have been more disappointed than anything. In the last few days, relatives of both of the victims have appeared in news stories and TV interviews. They have pleaded for help in bringing the killers to justice, in some cases cried out for revenge.

Lewis heard the pleas. He insisted one more time that what he told prosecutors months ago was still true. He doesn't know who stabbed Baker or Lollar.

"If I knew, I would have told them," Lewis said.

There were another half-dozen questions about forgiveness, regret, about contacting the families of the two young men, about whether he'd trade all the successes of this season to erase what happened in those few terrifying moments outside an Atlanta nightclub.