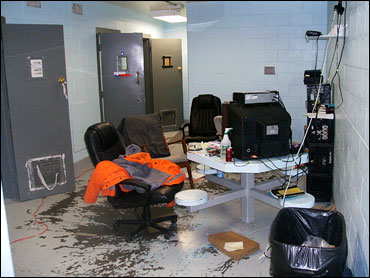 Inside the small brick building across from the courthouse, inmates had the run of the place, having sex with their jailer girlfriends, bringing in recliners, taking drugs and chatting on cell phones supplied by friends or guards, according to authorities. They also disabled some of the surveillance cameras and made weapons out of nails.

The doors to two groups of cells didn't lock, but apparently no one tried to escape - perhaps because they had everything they needed inside.

The jailhouse escapades - some of which date to 2006, according to authorities - have rocked Montague (pronounced mahn-TAYG), a farming and ranching town of several hundred people near the Oklahoma line, about 65 miles northwest of Fort Worth.

There were whispers in the past year about an affair between a female jailer and male inmate, but folks dismissed the rumors as small-town gossip. It was not until late last month, when a Texas grand jury returned a 106-count indictment against the former sheriff and 16 others, that the inmates-gone-wild scandal broke wide open.

The indictment charged Bill Keating, sheriff from 2004 until December, with official oppression and having sex with female inmates. The others indicted include nine guards - seven women and two men - who were charged with various offenses involving sex or drugs and other contraband. Four inmates also were charged.

Local, state and federal authorities are still trying to figure out how this small-town Texas jail was turned into something resembling a frat house.

The new sheriff, Paul Cunningham, said he was stunned while touring the jail for the first time just hours after being sworn into office Jan. 1. He saw partitions made of paper towels that blocked jailers' view into cells, and pills scattered about.

Cunningham, who had not worked for the county before his election in November, immediately ordered the jail closed and moved the nearly 60 inmates to another institution.

"It literally scared me - not for myself but for the employees," Cunningham said. "How somebody kept from being killed was beyond me."

Cunningham, who defeated Keating in the Republican primary last spring, suggested that Keating lost interest in the jail after that and turned his back on the place.

Separately from the indictment, Keating, 62, faces up to 10 years in federal prison after pleading guilty in January to charges he coerced a woman into having sex with him by threatening to jail her on drug charges.

Keating's attorney, Mark Daniel, called the latest charges against the former sheriff "kind of silly in the face of the federal investigation, like piling on." He declined further comment.

The investigation began with a tip last fall from inside the jail.

An official received a handwritten letter on notebook paper from an inmate arrested on charges of kidnapping his girlfriend. The inmate, Luke C. Bolton, said they met in 2007 when she was a jail guard and he was behind bars on another charge. He said their sexual relationship started in a jail shower and continued during her late-night visits to his cell.

"I'm just reaching out for help to show (the jailer) is a person who abused her power. She broke the law by having sex with me in cell #16 while I was an inmate. ... Please help me. I am telling the truth. Everybody knows I am," Bolton wrote, offering to take a polygraph.

The former jailer is among those indicted. Bolton remains in jail.

Current employees said they were shocked by the scandal.

"People say, `How could you not know?' Well, it didn't go on during our shift," said Jerrie Reed, who works the day shift. Reed said the then-sheriff sometimes asked to see female inmates privately in his office, but she assumed they were informants. She said none ever seemed upset as she led them shackled to and from Keating's office.

Cunningham said it appears that most of the illegal activities occurred in a certain section of the 100-bed, one-story jail, which has several long corridors that make it difficult for anyone to hear what is going on beyond their immediate areas.

The jail will reopen this week following about $1 million in repairs, needed after years of damage by inmates, Cunningham said. Also, the entire department is getting new uniforms, badges and vehicles.

"I just think this office needs to change the image completely," the new sheriff said. "I think we're well on our way to getting the public's confidence back."