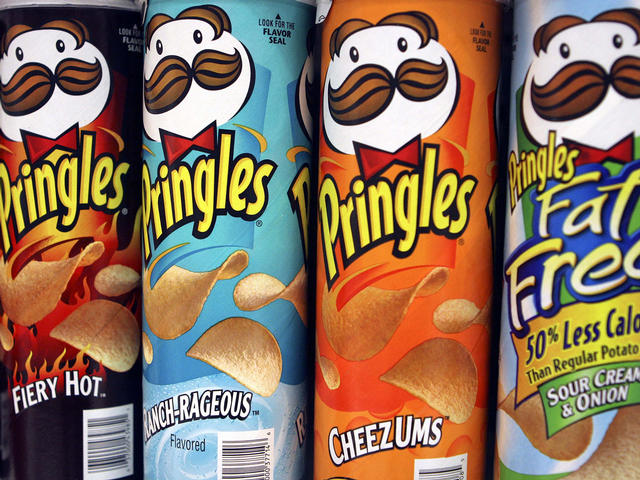 (CBS) Pringles, the popular chips, are in the news today after cereal giant Kellogg announced a $2.7 billion deal to purchase the brand known for chips in a can , CBS Moneywatch reported.

That got us at HealthPop wondering: What exactly is in the popular chip that's different from all other chips? Is one kind healthier than the other?

Pringles Original contains 150 calories in a 14-chip serving, along with 9 grams of fat, 2.5 grams of Saturated Fat, 160 milligrams of sodium, 15 grams of carbohydrates, and 1 gram of fiber, according to the nutrition facts on the company website.

For comparison's sake - as has been the case for many commercials over the years - Lay's Classic potato chips contain 160 calories in a 15-chip serving, 10 grams of fat, 1 gram of saturated fat, 170 milligrams of sodium, 1 gram of fiber, and 15 grams of carbohydrates.

Miriam Pappo, director of clinical nutrition at Montefiore Medical Center, tells HealthPop, "When you look at the actual nutrition facts label, they appear the same as a regular potato chip."

Pappo says Pringles are only 42 percent actual potatoes, and the rest is a combination of wheat starch and different types of flours. She said other kinds of potato chips on the market, like kettle chips, are comprised of potatoes, the oil they're fried in, and salt. She gives kettle chips the nutritional edge to most other kinds of potato chips because they are high in healthier kind of fat, monounsaturated oils.

Nancy Copperman, director of public health initiatives at North Shore - LIJ Health System in Great Neck, N.Y., says that both potato chips and Pringles aren't exactly healthy, but Pringles contain 2.5 times more saturated fat per serving, a worse type of fat. She said these days, most chips are trans-fat free and cholesterol-free (since they come from plants and cholesterol comes from animal fat), so there isn't a huge difference between the types of chips.

"I wouldn't say that Pringles are any healthier, I think more people are enamored with the container," she told HealthPop. "I think it's more marketing appeal than nutrition appeal."

If you're going to eat Pringles or any type of chip, both Pappo and Copperman tout moderation.

Copperman says when it comes to potato chips and other snacks, "We tend to eat the bag that we have in front of us."

She says studies have shown that buying a 1-ounce bag of potato chips is your best bet, or if you're buying a bigger bag - which are often cheaper - weigh out your portions and keep them in a plastic bag so they don't go stale. Or she suggests that salty snack lovers reach for popcorn, since three cups of popcorn contain about the same calories as 15 chips, and offer more fiber.

Pappo says there are much healthier chip options on the market, including sweet potato chips, purple potato chips, multigrain chips, or rice chips. If you love your potato chips, she said choose a baked chip that's made with healthy oil, or potato chips that have a peel, which contain more nutrients and healthier fat.

Pappo, a self-proclaimed former potato chip lover, made a conscious effort to switch to roasted almonds for her snack craving, and now she never even thinks about potato chips.

Said Pappo, "It's the fat and the crunch, that's what people love."