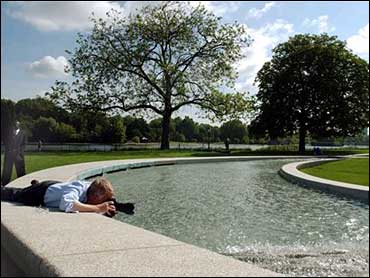 It was meant to be the perfect tribute to the "people's princess" — a pool of water designed for children to frolic in, rather than a stark stone obelisk to be stared at.

But bad luck and apparent poor planning have thwarted the hopes behind the Princess Diana Memorial Fountain in London's Hyde Park. On Sunday, the circular moat lay drained of water behind a 7-foot-high link fence to keep people out.

"It's disappointing. We came to the park specially to see it, and it's just a dry stone circle," said Australian tourist Ruth Petersen, 26.

The $6.5 million fountain, opened in a grand ceremony by Queen Elizabeth II less than a month ago, was closed indefinitely after three people, including a child, slipped and injured themselves while wading in it.

Environmental experts blamed the designers, claiming it should have been obvious that a granite moat combined with flowing fresh water would be a breeding ground for slippery algae.

Culture Minister Tessa Jowell criticized some of the visitors to the memorial for dropping litter, including diapers, into the fountain and allowing their dogs into the water.

Jowell said that the Royal Parks agency, which manages Hyde Park, is working to rectify the problems but that future visitors will have to play their part.

"People have got to be responsible in the way they let their children play in the fountain," she told the Sunday Telegraph newspaper.

"The critical issue is that this is a memorial. I don't think any responsible member of the public would want to see people allowing their dogs in it," she added.

The ring of water, designed by American Kathryn Gustafson, was chosen ahead of 57 other entries as the permanent memorial for Diana in the capital.

Gustafson said her design reflected aspects of the personality of Diana, the "people's princess" known for her love of children who died in a 1997 Paris car crash.

But the construction of the 700-ton fountain, in which water flows from the highest point down both sides into a basin called the Tranquil Pool, was dogged by controversy and bureaucratic wrangling from the start.

The eight-member committee choosing the memorial was deadlocked between Gustafson's design and a dramatic red fountain by Bombay-born British artist Anish Kapoor.

The government stepped in to provide the casting vote — and about $1 million of extra money when the privately funded project ran over budget.

Diana's mother, the late Frances Shand Kydd, was unimpressed. In 2002, she criticized plans for the memorial for a "lack of grandeur."

When the fountain opened on July 6, other critics branded it a storm drain, a prophecy that came true a day later when high winds and heavy rain hit the capital.

The fountain became blocked with leaves and overflowed onto the surrounding lawn. It was closed for a few days for a clean up, and Royal Parks assigned extra people to continually clear the fountain of debris.

Its reopening was short-lived. Royal Parks shut off the water again on July 22 after three people slipped, including a child who suffered a bump on the head and some bleeding.

Workmen have now roughened the texture of the stones to improve the grip and Royal Parks intends to carry out weekly cleaning with high pressure water jets.

Royal Parks said the fountain will remain closed until independent health and safety experts give their approval.

Diana's brother Charles Spencer told the British Broadcasting Corp. that he hopes a balance will be found between keeping the fountain accessible to the public and treating it with respect.

"I think the whole essence of Diana was her approachability and, somehow, these two things have to be balanced," he said.