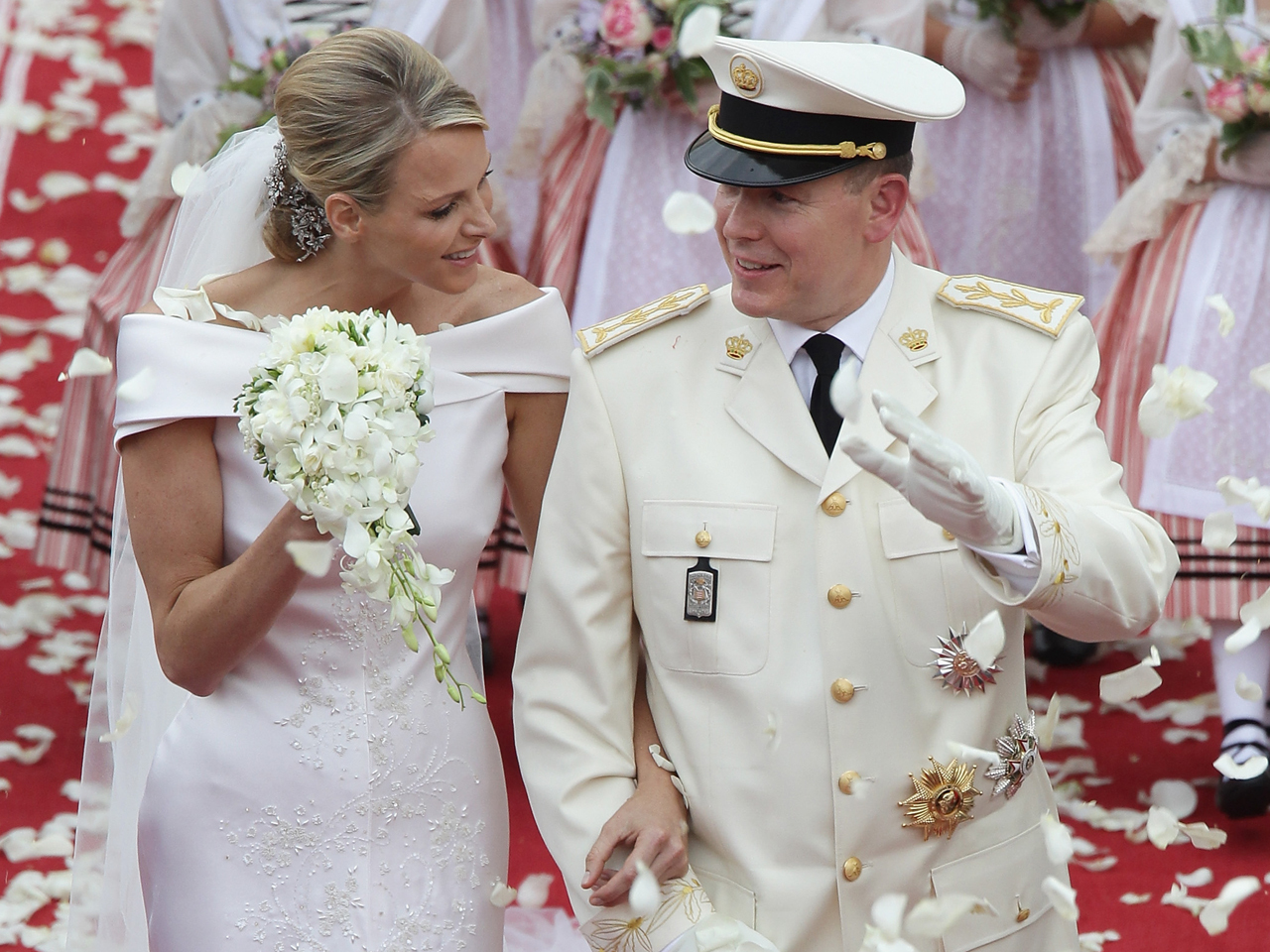 (CBS/AP) MONACO - The new Princess of Monaco, former Olympic swimmer Charlene Wittstock, and the the principality's ruler, Prince Albert II. exchanged vows for a second time in a Roman Catholic ceremony on Saturday in Monaco.

The two were first married in private, a low-key civil ceremony in the palace Throne Room on Friday, followed by a cocktail reception in the Palace Square and a dazzling sound and light show in the harbor.

The bride appeared to tear up behind the veil as she took her place at the altar inside the princely palace where the Catholic ceremony was taking place.

Charlene wore an off-the-shoulder crystal-and-pearl-encrusted gown by Giorgio Armani, and a long veil, held in place with a jeweled hair clip.

The couple exchanged 18 carat white gold platinum rings by Cartier. As Albert slipped the ring onto her finger, he winked, and as she put his on, she burst out into a broad smile.

The 53-year-old groom was dressed in an ivory summer uniform with embroidery on the cuffs and several medals across his chest. His fabric hat bore the symbol of Monaco.

They were married by Archbishop of Monaco Bernard Barsi to music provided by a South African singer, and a choir backed by the Monte Carlo Philharmonic Orchestra.

Charlene was attended by seven young bridesmaids, all about seven years old, from Monaco and six French districts. They wore costumes with embroidered taffeta bodices and red and cream striped taffeta skirts with velvet ribbons. Their outfits were topped off with wide-brimmed straw hats.

After the ceremony, he bride and groom rode to a nearby church where Princess Charlene placed her bouquet on the altar, just as Princess Grace once did.

More than 800 guests, including many famous names from the worlds of entertainment, government, royalty, business and fashion gathered in the palace courtyard to watch the wedding, the highlight of a two-day, $65 million wedding extravaganza.

Celebrated French-born chef Alain Ducasse prepared a multi-course dinner for 450 guests, which will take place after the ceremony.

Ducasse, who like many in his tax bracket has taken citizenship in Monaco, is the first chef to earn three Michelin stars in three different cities, including three for his Louis XV restaurant in Monaco. He has said freshly caught fish and vegetables grown on Albert's farm will be on the menu. Another fireworks show will follow.

The couple was married in an intimate civil serviceon Friday inside the prince's palace. Albert's sisters, Princesses Caroline and Stephanie, were among several dozen guests at Friday's ceremony, which was held in the palace's sumptuous throne room where the prince's father, the late Prince Rainier III, wed Hollywood legend Grace Kelly in 1956.

The blond beauty died in a car crash nearly 30 years ago, and this tiny principality on the Riviera had been without a princess ever since. Known as a notorious ladies man, 53-year-old Albert long eschewed marriage, and many in Monaco had resigned themselves to forever having a bachelor prince.

Photographers shouted at Czech supermodel Karolina Kurkova, dressed in a sober navy skirt suit, to strike a pose, and the crowd of thousands of the principality's citizens following the festivities on giant screens just outside the palace broke into cheers as French musician Jean Michelle Jarre swept by.