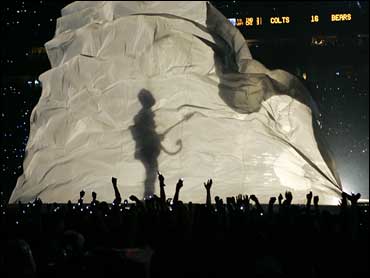 In our sensitive post-wardrobe malfunction world, some are questioning whether a guitar was just a guitar during Prince's Super Bowl halftime show.

Prince's acclaimed performance included a guitar solo during the "Purple Rain" segment of his medley in which his shadow was projected onto a large, flowing beige sheet. As the 48-year-old rock star let rip, the silhouette cast by his figure and his guitar (shaped like the singer's symbol) had phallic connotations for some.

But this time, it was the NFL that produced the halftime show (MTV did it in 2004). Spokesman Greg Aiello said the league has received no complaints.

"We respect other opinions, but it takes quite a leap of the imagination to make a controversy of his performance," Aiello said. "It's a guitar."

The majority of the reaction to Prince's performance has been laudatory, including positive reviews from The Associated Press, The New York Times and USA Today — all of which noted the lack of controversy in this year's halftime show. AP Entertainment Writer Douglas J. Rowe wrote: "He delivered one of the best Super Bowl halftime shows — ever."

For decades, the electric guitar, by nature, has been considered phallic. From Jimi Hendrix's sensual six-string swagger to Eddie Van Halen's masturbatory soloing, the guitar has often been thought an extension of a male player's sexuality.

"All that said, it didn't seem like a sniggering little puppet show," adds Edwards. "I think it was one of those things because a guitar at waist level does look like an enormous phallus."

By enlarging his shadow, it's possible Prince intended to accentuate this aspect of his solo, but it's just as likely it was accidental. (You can find videos of the halftime show at YouTube.com.) A message left with Prince's publicist Tuesday wasn't returned.

The late-night shows have taken notice. On CBS' "The Late Late Show" on Sunday night, host Craig Ferguson said of Prince: "He was obviously very happy to be there, wasn't he?"

Stephen Colbert reacted with mock outrage on Comedy Central's "The Colbert Report" Monday night: "They knew that they were dealing with a lustful, pansexual rock 'n' roll deviant," said Colbert, who joked that the sheet hid (not enhanced) Prince's "demonic guitar phallus."

In recent years, Prince has scaled down his performances, which were once renowned for their gymnastics. His mini-concert at the Colts-Bears game in Miami included parts of "Purple Rain," "Let's Go Crazy," "Baby I'm a Star," Bob Dylan's "All Along the Watchtower," the Foo Fighters' "Best of You" and Creedence Clearwater Revival's "Proud Mary."

The Minnesota native has attracted controversy before. Tipper Gore launched a campaign to place a warning sticker on his 1984 album "Purple Rain" because of the lyrics to the song "Darling Nikki." Though his musical style has been expansive, he's best known for funky, sexually charged songs like "I Wanna Be Your Lover" and "Get Off."

Prince's previously most talked-about performance came at the 1991 MTV Video Music Awards, where he donned yellow, butt-baring pants, (a stunt later spoofed by Howard Stern). Always eccentric, he famously changed his name to The Artist Formerly Known as Prince, then to simply a symbol and finally back to Prince. He also became a Jehovah's Witness in the mid-`90s.

But Prince's halftime performance, though celebrated, came in a much different cultural environment, where even the fleeting outline of a man and his guitar could, for some, suggest shaded depravity.

"A mystery to me": Joe Jackson's fraught relationship with his kids