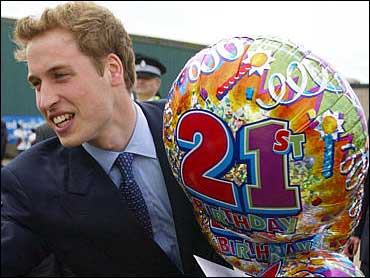 Prince William turned 21 on Saturday, proving himself to be the model of a modern royal: He wears jeans, loves fast motorbikes, does his own grocery shopping and holds tight to his independence.

True, William's coming of age brought new responsibilities for the second in line to the throne. The day was marked in traditional style with an official poem and newly minted gold coins.

But the prince also made sure it was celebrated his way, ordering the royal family - including his grandmother, Queen Elizabeth II - to ditch the usual formal state function in favor of an African-themed costume party.

CBS News Correspodnent Tom Fenton describes William as a young man on a tight leash, who complains he has so many people around him, that he "gets pulled in one direction, and then the other." He is in no hurry to take on a public role.

Fenton adds that the limelight will be increasingly harder to avoid from now on. "Girls will be a problem for this photographic prince who so strikingly resembles his mother. He knows the pressures she was subjected to when she married into the royal family, Somehow he's got to find the right balance."

In an interview to mark the occasion, the sporty prince described his desire to support charities, following in the footsteps of his late mother, Princess Diana. He also defended his father, Prince Charles, from critics and described the values he lives by.

"My guiding principles are to be honest, genuine, thoughtful, and caring," William told the Press Association, the British news agency.

William said he was greatly influenced by his visits to homeless hostels as a teenager with Diana, who was killed in a Paris car crash in 1997. "I learned a lot from it, more so now than I did at the time," William said.

"My mother used her position very well to help other people, as does my father, and I hope to do the same," he said.

The prince also revealed his love of fast transport causes his 54-year-old father as much worry as any other parent whose children do not have round-the-clock security.

"My father is concerned about the fact that I'm into motorbikes but he doesn't want to keep me all wrapped up in cotton wool," he said.

"So you might as well live if you're going to live. It's just something I'm passionate about."

William spoke fondly of Charles, saying his father has been an important influence, particularly on rural issues such as organic farming and sustainability, and that he deserved more respect from the media.

"He does so many amazing things," said William. "I only wish people would see that more because he's had a very hard time and yet he's stuck it out and he's still very positive."

Charles is often derided by the British press as out-of-touch, and his relationship with the divorced Camilla Parker Bowles has led to some speculation that he should pass his right to the crown on to the popular William.

At just under 6 feet 4 inches, "Wills," as he is known to friends and family, is an excellent sportsmen and a competent academic whom royal aides likes to portray as an average young man.

Unlike his father at the same age, William refuses to be served by a valet or chauffeur. He shares a flat near St. Andrews University in Scotland with three other students, does his own shopping at the supermarket, cycles around town and enjoys a cider in the pub.

In the latest of a series of interviews designed to ease William into the spotlight, the prince wears the jeans and casual shirt uniform of his peers. But the gold sofa on which he reclines and the sumptuous surroundings of St. James' Palace, his London home, reveal his blue blood.

William described himself as "not an over-dominant person," but a necessarily confident one.

"I like to be in control of my life because I have so many people around me, I can get pulled in one direction and then the other," he said.

"If I don't have any say in it, then I end up just losing complete control and I don't like the idea of that. I could actually lose my identity."

He stamped that stubbornness over celebrations for his 21st, requesting an "Out of Africa" party for more than 300 family and friends at Windsor Castle.

William, who is teaching himself Swahili and has been on safari in Africa several times, said he wanted to avoid a "sterile" official function and have his relatives let their hair down.

"I thought it would quite fun to see the family out of black tie and get everyone to dress up," he said.

"My grandmother may be slightly apprehensive as to what she's going to wear, and what's going to happen, but she's very much looking forward to it. She's very positive towards the whole thing," he said.

The party is strictly off-limits to the media.

But the royal birthday comes with more than a big party and William has a few new official duties, the most important of which is his appointment as a Counselor of State. Along with five others, including his father, the prince is delegated powers to act on behalf of the queen, Britain's head of state.

Britain's poet laureate, Andrew Motion, gave the prince a gift of two poems - one in rap form and one a sonnet.

Motion said the tribute, "On The Record," is a sort of literary double-sided LP to reflect William's role as a "new kind of royal figure," who also retains traditional responsibilities.

The Royal Mint marked the occasion by releasing a 22-carat 1,000 pound gold coin - the highest face value given to a coin in Britain. Twenty-one of the coins have been minted and are on sale for 14,500 pounds, or $23,200, each.