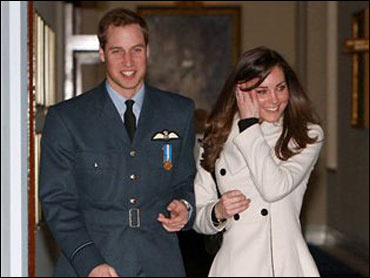 Prince William and longtime on-again, off-again girlfriend Kate Middleton are very much on again, and have been for a long time, and are planning to finally walk down the aisle in 2012, according to several reports.

But, says Katie Nicholl of Britain's Mail on Sunday, we might see royal wedding bells as soon as next year.

Nicholl, the author of "William and Harry," first reports 2012 would be the date nearly a year ago - but now says the nuptials may happen sooner.

On "The Early Show," she pointed out to co-anchor Harry Smith 2012 already shapes up as a standout year for the British Royal Family.

"It's going to be the Queen's Diamond Jubilee (60 years on the throne)," she said. " … So, this is a really, really important and momentous occasion. And, don't forget, we've also got the Olympics (in Britain). So, 2012 will be busy.

"When I was first tipped off that it might be a 2012 wedding, the first thing I thought was, 'Where is it going to happen?' Because it is going to be busy."

That said, Nicholl noted that she's "still not ruling out 2011 as a wedding date. I'm not committing to 2012. I think there's potential in the royal calendar for both. And don't forget, royal weddings don't just happen, they're planned.

"The other story I already reported is that the Queen wants to keep her Diamond Jubilee completely separate from the Olympics; she doesn't want them joined. So, what will happen in 2012 is, the first part of the year is going to be dominated by the Diamond Jubilee, and the second part will be the Olympics. So, actually, there is a potential space for a royal wedding, but it's going to be busy. It's going to be crowded."

And festive, Nicholl says. "You remember the street parties in 1981, of course, when Charles and Diana got married. I think we'll see this on the same sort of scale."

William and Kate have been an item nearly nine years so, Nicholl observes, adding the obvious, "It's been quite a long wait!"

It's the longest such wait in the Royal family's history, she says. "Charles and Diana) were engaged for literally just a few months until they made their announcement official," Nicholl continued. "I'm told by friends of William and Kate that they are pretty much engaged at the moment. You're not with someone for that long without making some form of life commitment. I don't think Kate would carry on waiting this long if she didn't know, at the end of the day, there's gonna be something fabulous, i.e., a wedding. … She is waiting.

"She's not wearing any jewelry to signify that at the moment. The thing is, as soon as they do make an announcement, their lives will change forever. So, there is something to holding off."

At the moment, Nicholl says, Kate "is working, but she is basically living in Wales. Prince William is about to graduate as a (military) search and rescue helicopter pilot in the next week or so. And they're living in Wales … on a rather wind-swept island just off the coast … and very happy, left to their own devices. We never really get to know what's going on, and that's just how they like it."