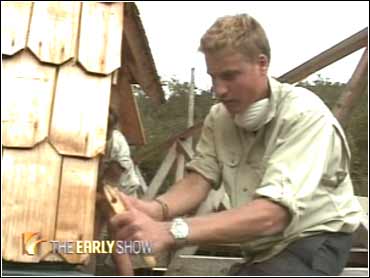 And, yes, he does clean bathrooms.

William — or Will, as the young prince insisted on being called — spent part of his year off between high scool and college, working for a British aid group in Tortel, a Chilean coastal village so remote you can only get to it by plane or boat, reports CBS News Correspondent Kimberly Dozier.

The prince slept side-by-side with all the other adventurers, everyone from a Cambridge University graduate to a former drug user.

For a few days, a camera was allowed to follow William on his ten-week expedition in the back hills of Chile. In this extraordinary footage, the future king comes across as a modest and manly 18-year-old with a sense of humor, reports CBS News Correspondent Tom Fenton.

Unlike his mother Diana, Prince William's photogenic charms are being used by Buckingham Palace to great effect. They released an hours' worth of these pictures, showing this future king as truly a man of the people.

Marie Wright, the Tortel project manager, said, "He has had a laugh, he has worked hard, he is laid back, he has struck a really good balance between working hard, having fun, getting on with everyone."

And he's done what no one's really managed, since his mother died — he's given an unpopular royal family a new lease on life, and, maybe, on Buckingham Palace.

Like his mother, William is a natural with youngsters. In some of the footage, he uses games to teach English to 10- and 11-year-olds in the local school.

It has been a learning process for the prince as well, and one that may stand him in good stead when he finishes his education and becomes a public figure.

In the meantime, the future king of Britain has been scoring points, and having fun while he is at it.

William's image was splashed across almost every British newspaper Monday but the once feared "Royal Ratpack" reporters had been successfully excluded from the biggest royal story of the year.

None of the regular royal reporters and photographers was allowed to go to South America to cover the event.

Instead, royal press handlers decreed that the Press Association, Britain's domestic news agency, and Independent Television News should provide the words and the pictures.

The result was blanket news coverage Sunday and Monday, with 18-year-old William pictured chopping wood, scrubbing a lavatory floor, carrying a child on his shoulders and acting as a disc jockey on a local radio station.

Royal officials thought the pictures and television footage were "excellent" but made clear that media access to the prince would in future be even more limited.

The highly favorable image transmitted from Chile was one of William as a down-to-earth action man, a king in waiting for the 21st century.

"It's fun, games and hard labor as William serves porridge in Patagonia," said The Dail Telegraph.

The Daily Express added: "Whether he's cleaning the loo, lighting the stove or keeping an entire class of youngsters happy, William rises to the challenge."

It was a far cry from the media mayhem that surrounded his mother as her marriage to Prince Charles broke up and at the time of her death in a Paris car crash in 1997.

That was the highpoint for the royal specialists in the tabloid press and courtiers have been anxious to spare William the same kind of obsessive scrutiny.

The official reasons for denying the British press their media opportunity in Chile were the difficulty and cost of transporting journalists to such a remote location and an unwillingness to allow William's trip to be disrupted.

Royal officials acknowledged there would be some disappointment in the media over the arrangements and Monday that was indeed beginning to emerge.

The Daily Express's royal editor, Robert Jobson, said media coverage could not be handled on this basis forever because as William grew older press interest in him would intensify.

"The media will not always be able meekly to accept reports and pictures approved, Kremlin-style, by the palace. It will expect reasonable access to report on our future king," he wrote.

Under a self-regulatory pact with the Press Complaints Commission, Britain's media watchdog, the newspapers have agreed not to harass William and his younger brother Harry.

William starts at St Andrews University in Scotland next September and the Commission's chairman, Lord Wakeham, has said he wants the paparazzi to leave the student prince alone.

While editors seem unlikely to turn on William any time soon, there are fears of media discontent if courtiers are too restrictive.

There was, opined one royal insider, too much control and stage management being exerted by officials at St James's Palace, the London home of William's father Prince Charles.

"I think the journalists feel manipulated," he said. "The backlash could come sooner rather than later."