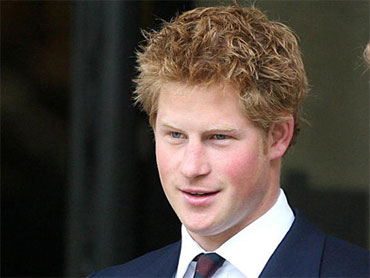 Britain's Prince Harry is in the headlines again -- and it looks like he's back to his old partying ways, CBS News Correspondent Elizabeth Palmer reports from London.

The Buckingham Palace public relations machine has given us Prince Harry the soldier, Harry the charity patron and Harry the athlete, Phillips points out.

But, he says, what the British news papers love best is -- Prince Harry the wild party boy!

He famously once attended a costume ball dressed as a Nazi.

And threw a drunken punch at a photographer.

Now, say the papers -- he's at it again -- nightclubbing 'til dawn and inhaling laughing gas for a quick -- if legal -- high.

His longtime girlfriend, Chelsy Davy, recently left him, to finish her legal training in Africa.

And that's the problem, says royals-watcher Katie Nicholl. "The slip-up happened just as the relationship with Chelsey has come to an end," Nihcoll says. "Whatever people said about Chelsey -- yes, she is a party girl, blonde, she's fun. She did actually keep Harry in check. He was always much better behaved when Chelsey was around."

Now that she's not, Phillips observes, life could get a lot more more exciting -- especially for Britain's tabloids.