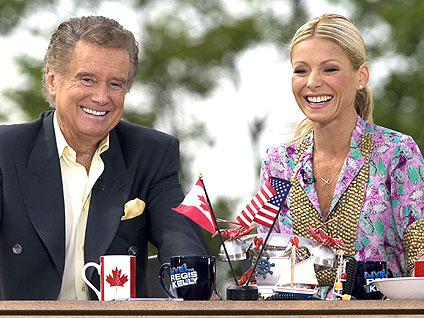 Canadian reports say that eight Mounties flanked the hosts as they greeted thousands of cheering fans who gathered at Confederation Landing Park by 7 a.m. to attend the taping on the Charlottetown waterfront.

"It's not that well known but it really is a masterpiece of a place, isn't it?" Philbin said during an interview with style guru Carson Kressley, according to CTV.

The show will tape in Charlottetown from July 12 to 15. Guests this week are to include Stephen Moyer of "True Blood, " John Corbett of "Sex and the City" and Canadians Elisha Cuthbert, Caroline Rhea and Melanie Fiona.

According to the Vancouver Sun, some have called the $1 million in government subsidies spent to bring the show to Prince Edward Island as wasteful. However, the province hopes the expenditure will result in heightened awareness of the island, which is heavily reliant on tourism.