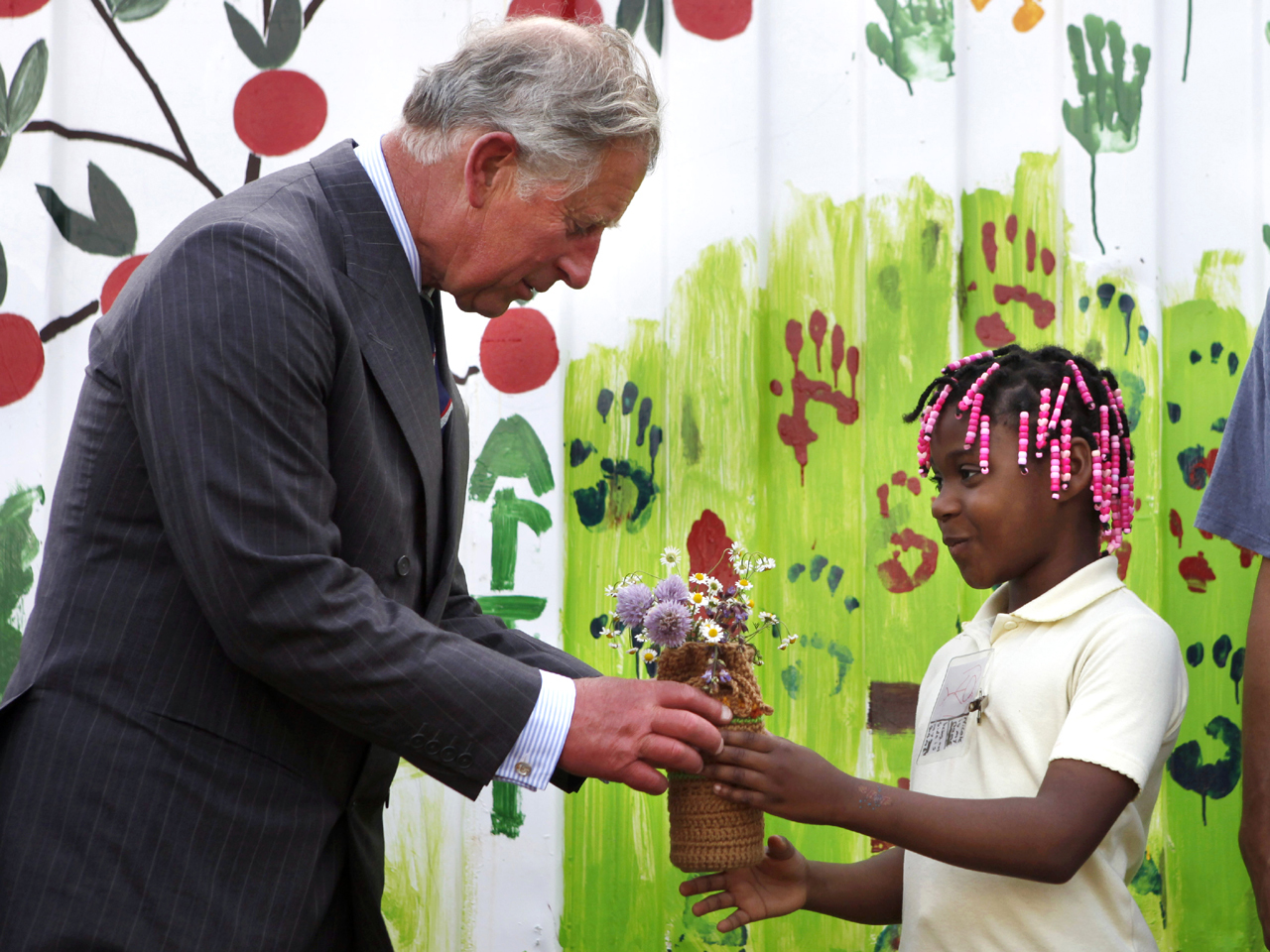 WASHINGTON - A relaxed and smiling Prince Charles resumed his public duties following his son's royal wedding with a trip to Washington, where he offered words of praise and encouragement Tuesday to the operators of a small urban farm that grows produce for low-income residents.

The Prince of Wales spent about 35 minutes touring Common Good City Farm on Capitol Hill. Wearing a gray, double-breasted suit on a muggy, windy day, he shook hands and made small talk with farm staffers, volunteers and dozens of onlookers who crammed against a picket fence.

He did not speak to reporters or address the crowd, but he chatted up children about composting and the members of a jazz band about their equipment. A longtime advocate of sustainable agriculture, Charles picked up a piece of spinach grown at the farm and popped it into his mouth.

"He talked about the food," said Lonice Queen, 15, who lives near the farm and volunteers there. "He tried it; he loved it."

Charles' trip to Washington is his first U.S. visit since 2007. On Wednesday, he is scheduled to meet with President Barack Obama and will also deliver the keynote address at a conference on "The Future of Food" at Georgetown University. His older son, Prince William, married Kate Middleton last Friday.

Charles flew to the United States on a private jet donated by Texas billionaire Joe Albritton, a close friend and supporter of the prince's charities.

Earlier Tuesday, Charles visited the Supreme Court and met with Justices Stephen Breyer, Antonin Scalia and Sonia Sotomayor before attending a reception for past Marshall scholars. The scholarship program gives American students a chance to do graduate work in the United Kingdom.

Breyer greeted Charles at the curb, and the two strode across the court's plaza to its imposing front steps, waving to onlookers. But not even the prince, it seems, can enter the court through its front doors, beneath the words "Equal justice under law."

The court closed the front entrance last year over security concerns. Breyer, whose wife is English, led Charles around to a new side entrance for visitors.

After about an hour at the court, Charles and Breyer exited through the front door. The prince made his way over to onlookers, where he had his picture taken, chatted and shook hands.

Charles arrived at Common Good City Farm late Tuesday afternoon. The farm sits on the former baseball diamond of a razed elementary school in a low-income community near the campus of Howard University. At least one in five residents of the LeDroit Park neighborhood is overweight, and nearly one in 10 has diabetes, according to the farm's executive director, Pertula George.

"We had a good discussion about the obesity epidemic in this country and how we can turn it around," George said. "He wants us to have as much of an impact as we can."

An enthusiastic gardener, Charles was impressed that the farm was using irrigation equipment known as drip tape in a bid to conserve water, George said.

Low-income residents who volunteer at the farm get to take home a wide variety of fruits and vegetables. Since January 2007, the farm has provided more than 400 bags of fresh produce to families in the community. More than 2,000 pounds (900 kilograms) of food were grown there last year.

D.C. Mayor Vincent Gray, who was on hand to greet Charles, described the prince as a "visionary" on environmental issues who was bringing well-deserved attention to the work done by the farm.

"It's a great day for the District of Columbia to be able to host His Royal Highness," Gray said.