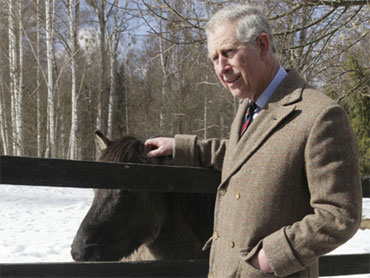 Prince Charles' wife, Camilla, canceled plans to visit a Polish forest and a mosque with him due to back pain, his office said Tuesday.

Camilla has a pinched nerve in her back, Clarence House said. It said that, on medical advice, she canceled plans to travel with her husband from Warsaw to eastern Poland, where the prince visited a bison reserve in a primeval forest and a mosque belonging to Poland's tiny Muslim Tatar community.

Camilla instead will visit the British Embassy in Warsaw and view a new museum on the life of Polish piano composer Frederic Chopin.

The couple arrived Monday in Poland, starting a nine-day visit to central Europe that will also take them to Hungary and the Czech Republic.

On Monday evening, the couple were guests at a state banquet held by Polish President Lech Kaczynski and his wife, Maria. Charles gave a speech praising the historical links between Britain and Poland, mentioning the half-Polish King Canute, who ruled England in the 11th century as well as the Polish pilots who fought against Nazi Germany in the Battle of Britain.

Charles also referred to some of his charities that have been active in Poland since after the fall of communism in 1989.

"I was particularly keen to do what little I could to help your country after the collapse of communism, having for so long held a combination of profound admiration and heartfelt sympathy for the appalling suffering of the Polish people," he said, according to the Press Association news agency.