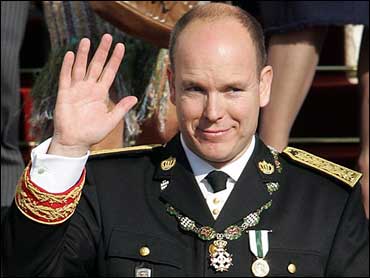 Monaco's Prince Albert II has acknowledged fathering a second child out of wedlock — a 14-year-old girl living in California, his lawyer said in an interview with France's Le Figaro published Thursday.

Albert, ruler of the principality, "officially recognizes a paternity that was legally established a few weeks ago," lawyer Thierry Lacoste was quoted as saying.

Albert had initially planned to keep his parentage of Palm Desert resident Jazmin Grace Rotolo secret until she reached adulthood, but "the situation had become untenable for her" in recent weeks amid increasing speculation about her father, Lacoste said.
The Desert Sun of Palm Springs reported on its Web site Wednesday that a 1992 Riverside County birth certificate identifies the father as Albert Alexandre Louis Pierre Grimaldi of Monaco.

The royal palace refused comment Wednesday on reports about the case, saying it was a private affair of the prince.

French media reports have said Albert had a brief affair with the girl's mother, former waitress Tamara Rotolo, in 1991 when she vacationed on the Cote d'Azur.

The Desert Sun said it was unable to reach Rotolo on Tuesday and Wednesday.

A Palm Desert woman named Patricia Rotolo, who identified herself as Tamara Rotolo's cousin, told the paper that "all's been handled really well for (the child's) sake." She said the family was aware that French journalists and paparazzi recently came to town to try to snap photos of her cousin's daughter.

Lacoste said Jazmin Grace Rotolo is welcome in Monaco, but cannot take the throne and will not bear the Grimaldi family name. Neither will Albert's other child out of wedlock, 3-year-old Alexandre.

The 48-year-old ruler, who has never married, unblushingly acknowledged last July that he had fathered the boy with a former Togolese flight attendant.

Last year, Albert told The New York Times that other women had made similar claims. "I don't know of any others that could be true," he said.

Rotolo made a paternity claim shortly after the child was born, he told the Times, but after a U.S. court dismissed the case, he thought the matter had gone away. Since the story of Alexandre hit the media, though, he said she had contacted his lawyer again.