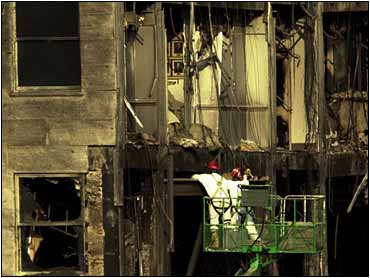 New radar evidence obtained by CBS News strongly suggests that the hijacked jetliner which crashed into the Pentagon hit its intended target.

Eight minutes before the crash, at 9:30 a.m. EDT, radar tracked the plane as it closed to within 30 miles of Washington. Sources say the hijacked jet continued east at a high speed toward the city, but flew several miles south of the restricted airspace around the White House.

At 9:33 the plane crossed the Capitol Beltway and took aim on its military target. But the jet, flying at more than 400 mph, was too fast and too high when it neared the Pentagon at 9:35. The hijacker-pilots were then forced to execute a difficult high-speed descending turn.

Radar shows Flight 77 did a downward spiral, turning almost a complete circle and dropping the last 7,000 feet in two-and-a-half minutes.

The steep turn was so smooth, the sources say, it's clear there was no fight for control going on. And the complex maneuver suggests the hijackers had better flying skills than many investigators first believed.

The jetliner disappeared from radar at 9:37 and less than a minute later it clipped the tops of street lights and plowed into the Pentagon at 460 mph.

Some eyewitnesses believe the plane actually hit the ground at the base of the Pentagon first, and then skidded into the building. Investigators say that's a possibility, which if true, crash experts say may well have saved some lives.

At the White House Friday, spokesman Ari Fleischer saw it a different way.

"That is not the radar data that we have seen," Fleischer said, adding, "The plane was headed toward the White House."

Ten days after the hijacked airliner slammed into the Pentagon, leaving 189 people dead or missing including those on the plane, and gouging a giant smoky slice out of the world's biggest office building, some 300 people were looking for clues.

Officials said no survivors had been taken out of the building since the day of the crash and 104 people have been identified.

Rescue crews have turned over the operational control of the crash site to the FBI. The transfer clears the way for the criminal investigation to intensify.

Additional human remains are expected to be recovered during the criminal investigation at the site, which could last for a month.

The fire chief in Arlington County, Va., says all areas of the Pentagon (with the exception of the fourth- and fifth-floor corridors of the three outer rings) have been released to the Department of Defense.