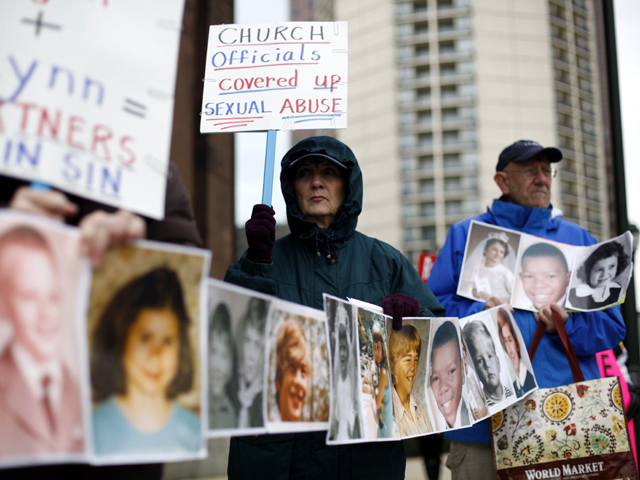 (Scroll down to see a list of the priests suspended)

The archdiocese announced Tuesday the suspension from ministry of 21 priests cited by a Philadelphia grand jury report last month as ducking what the panel believed were credible accusations of abuse.

CBS News correspondent Eliane Quijano reports that parishioners leaving Ash Wednesday mass from St. Isaac Jogues Catholic Church in Wayne, Pa., were disappointed and angry that their priest, the Rev. Steven Harris, was among those suspended.

"It's not right, and to think that these holy men can do these outrageous things," Holly Strzempek told Quijano.

A statement issued by the archdiocese said Cardinal Justin Rigali suspended the priests from active ministry pending a further review of allegations of child sex abuse raised against the priests but dismissed by an archdiocesan review board, which ruled those complaints not credible.

Rigali announced on Feb. 16 that three priests -- the Rev. Joseph DiGregoria, the Rev. Joseph Gallagher and the Rev. Stephen Perzan, all of whom were specifically named in the grand jury report -- were being suspended from public exercise of their ministry pending a second review of their cases.

At that time, Rigali stated that the archdiocese planned a re-review of the 34 other cases of priest child sex abuse cited by the grand jury's review of those files as being credible.

According to the statement from the archdiocese, five other priests would have been subject to suspension, but one is already on leave and two others are said to be incapacitated and have not been in active ministry.

Two others are members of a religious order which has not been identified and are no longer serving in the archdiocese, according to the statement. Their superiors have been notified as well as bishops of the dioceses where they are living.

The archdiocese said the eight remaining priests cited by the grand jury will not be suspended and that the initial independent examination of those cases found no further investigation warranted.

Due to the statute of limitations, none of the priests will face criminal charges.

Rigali released a statement Tuesday that read in part: "I know that for many people their trust in the church has been shaken.

"The 2011 grand jury report ... presented us with serious concerns that demand a decisive response."

Rigali's actions Tuesday were recommended by Gina Maisto Smith, a former Philadelphia assistant district attorney who handled sex abuse crimes. She was hired last month after the grand jury report to advise the archdiocese on these matters.

David Clohessy, executive director of the Survivors Network of those Abused by Priests, called Rigali's move a long overdue step which will make children safer in the short term.

But he said much more remains to be done.

"Suspending credibly accused child molesters is just a smart defense move, and it's great PR and it's something, frankly, that Rigali has no choice but to do," Clohessy told KYW radio.

Sources say the suspended priests began getting notifications Monday morning and were told to clear out of their parishes by 5 p.m. that day.

The announcement came on the eve of Ash Wednesday, the start of the Roman Catholic Church's 40-day observance of Lent, a time of penance, prayer and sacrifice.

A source confirmed to KYW-TV that the following priests were suspended by the archdiocese: