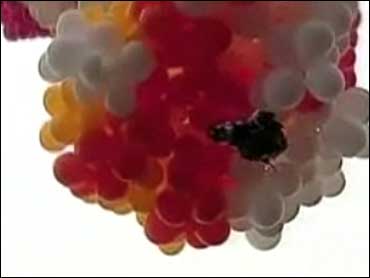 Rescuers reached a cluster of brightly colored party balloons floating in the ocean off Brazil's coast Tuesday but did not find the Roman Catholic priest who had been using them in a bid to set a flight record.

Rev. Adelir Antonio de Carli remained missing after lifting off from the port city of Paranagua on Sunday strapped to hundreds of helium-filled balloons. He was also wearing a helmet, aluminum thermal flight suit, water proof coveralls and parachute and was seeking to break a record for the longest time in-flight with party balloons.

He planned to use the money raised in his attempt to break the 19-hour record to fund a "spiritual" rest-stop for truckers in Paranagua, home to Brazil's largest grain port.

De Carli was reported missing about eight hours after taking off when he lost contact with port authority officials.

Authorities reached the cluster of balloons late Tuesday but the priest was not there, Globo TV said.

"Given his physical condition and the equipment he was carrying, I would say there is an 80 percent chance that he is still alive," said Johnny Coelho, commander of the Penha Fire Department.

De Carli, who has taken jungle survival and mountain climbing courses, was carrying enough drinking water and cereal bars to stay alive for at least five days, Coelho said, suggesting the priest may be adrift in the ocean or resting on a beach or forest-covered mountain along the coast.

The priest, an experienced skydiver, also had a GPS device, satellite phone and buoyant chair with him, Coelho said.

"He last used the phone and GPS on Sunday at 8:45 p.m. to let the Navy know his location," Coelho said. "We haven't heard from him since."

The priest embarked on a similar adventure on Jan. 13, when he used 600 balloons to carry him on a four-hour, 17,390 foot-high voyage from the town of Ampere to neighboring Argentina, where he landed safely.

Parishioners at his Sao Cristovao parish maintained a vigil for de Carli Tuesday, confident he would be found.