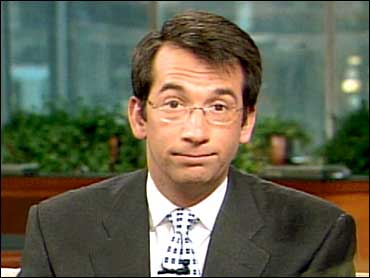 Sometimes, running off and joining the circus seems like a really nice idea. And recently, that's just what The Early Show's weatherman Dave Price did.

As the self-proclaimed resident clown on The Early Show, Price thought it was fitting for him to visit Cirque du Soleil - La Nouba, which is celebrating its 5th anniversary.

Admit it. You want to join the circus. Everybody does. I, however, joined Cirque du Soleil, an incredibly acrobatic show, so my training started on the trampoline.

But I think I may have confused the order of difficulty. There was no way I would be able to mimic 30 flips on the trampoline as demonstrated by one of the artists.

Other performers climb a wall in the show. They say the secret to performing the stunt is to know how to bounce off your back.

But after taking a quick try, I decided it was time for a quick break.

One performer rolled the wheel, with me in it, toward his partner, who caught me. The key, I was told, is make no one angry. I liked the idea of wheels, but the German Wheel wasn't for me.

So, I went for a nice bike ride – upside down.

I was on a bicycle upside down above a concrete floor, I'm not an acrobat and I don't speak French. Hey, I was in good shape – sort of.

You know what might be easier, actually? If I had rode the bike on the ground.

It was pretty clear to everyone that I was born to do this. So with the right costume and makeup, I was fully in character, ready for dress rehearsal.

I took a little too long getting across the stage, however, so they wouldn't let me ride the bicycle during the show. But I still managed to sneak onstage. There's no stopping natural talent.

"La Nouba" is in permanent residence in Orlando, but there are several other Cirque du Soleil acts that you can catch all around the United States.