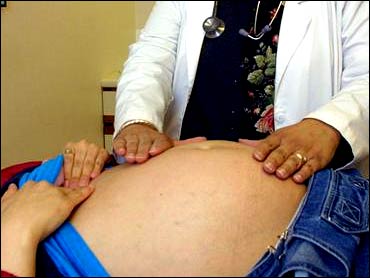 Giving pregnant women the hormone progesterone can reduce their risk of premature delivery by one-third, offering the first clear-cut way to head off this increasingly common and dangerous problem, a study found.

Low birth weight and serious, sometimes-deadly complications also occurred less often in babies whose mothers got the weekly injections, according to the study in Thursday's New England Journal of Medicine.

"This is really the first innovation that's clearly been shown to prevent or reduce the incidence of premature delivery," said Dr. Charles J. Lockwood, director of obstetrics and gynecology at Yale University School of Medicine and former chairman of obstetrical practices of the American College of Obstetricians and Gynecologists.

The study involved women at very high risk of premature delivery. The women previously had at least one baby very early - at about 31 weeks on average. Full term is considered 37 weeks to 40 weeks. Some of the women received progesterone; a comparison group got shots of an inert oil.

The progesterone proved so effective that the study was halted early because it would have been unethical to keep giving some women a placebo.

"This is a start at finally having some successful treatments to prevent the biggest problem we have in caring for pregnant women," said lead researcher Dr. Paul J. Meis, professor of obstetrics and gynecology at Wake Forest University School of Medicine. "We have tried so many treatments to prevent premature birth, and they have not been successful."

Compounds of progesterone, a natural hormone that helps maintain pregnancy, were used in the 1960s and '70s to prevent premature birth. But Meis said they fell out of favor because the few, small tests of effectiveness had mixed results.

His study, conducted at a network of 19 clinical centers run by the National Institute of Child Health and Human Development, followed 459 women, mostly in their 20s, who had high-risk pregnancies from 1999 to 2002.

The babies of mothers given progesterone also fared better, with only 27 percent weighing less than 5½ pounds at birth, compared with 41 percent in the comparison group. Babies of mothers in the progesterone group also were less likely than the others to be stillborn, die soon after birth or have breathing problems or other serious complications, although the numbers with such problems were too small for firm proof.

Lockwood said many doctors now are starting to give progesterone in high-risk pregnancies, because results of this study were reported at a February conference and because a similar study in Brazil published in February found daily vaginal suppositories of progesterone cut premature births by half.

But Dr. Michael Varner, principal investigator for the portion of the study conducted by the University of Utah, urged caution. He said the study's findings need to be replicated and follow-up done "that shows we're not trading one problem for another."

The form of progesterone used in the study - hydroxyprogesterone caproate - isn't available commercially in the United States, and it's unknown whether other forms of progesterone would be as effective, he said.

In 2001, 11.9 percent of American babies were born before 37 weeks' gestation, a 27 percent increase over 1981 that was partly fueled by more multiple births, according to the National Center for Health Statistics.

Premature birth is the country's No. 2 cause of infant mortality. But with better medical care for preemies, the death rate in the first year dropped from 12.6 deaths for each 1,000 births in 1980 to 6.9 deaths in 2000.

Dr. Joseph Apuzzio, director of maternal-fetal medicine at University of Medicine and Dentistry of New Jersey in Newark, said researchers now must see if progesterone has any long-term effects on babies. He noted mothers getting progesterone had five miscarriages, but the comparison group had none, raising a "yellow flag."

Apuzzio said scientists still must nail the cause of the many unexplained premature deliveries - those not triggered by complications such as uterine infection or bleeding, overactive thyroid or drug abuse - to find the best prevention method.