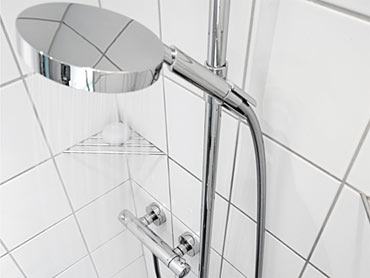 Accidents in the home account for thousands of deaths each year, and falls are among the main culprits.

But as home safety expert Alison Rhodes noted on "The Early Show" Thursday, there are inexpensive products that can help make falls at home much less likely or minimize the harm they do.

Rhodes, who's known as ""The Safety Mom," says the elderly and toddlers - kids up to about 3 -- are most at risk, but the rest of us move so quickly coming and going we put ourselves at risk, as well.

Kids are most at risk for head injuries and concussions from falls out of windows and down stairs, Rhodes points out. Hip fractures are always a huge risk for the elderly.

Others especially at risk, Rhodes says, include moms who are so busy multi-tasking during the day -- for example, trying to get up the stairs with packages and bundles in one trip instead of taking three just to be safe and holding the banister. Rhodes has a friend who did serious damage to her face just because she was rushing. So taking your time is a most important precaution.

Tubs are the leading cause of falls - not just for seniors, but kids, as well. So the first thing to do would be to install a GRAB BAR. We had an installed chrome one on the "Early Show" set, but we also recommend the MOEN 9 INCH HAND GRIB -- that's $13 on Amazon and super easy to install. This product doesn't have to be limited to the tub either: You can mount it in strategic locations throughout the house where people need a little extra stability getting to their feet or any particularly tricky threshold. The Moen Hand Grip can take up to 300 pounds of pressure and is great for any sized hand. Then -- if a fall is happening -- you want to make sure you're protected on the way down. A cool-looking PROTECTIVE FAUCET COVER -- that also serves as a bubble bath dispenser -- is from a company called Boon and will lessen the impact should your head happen to hit the faucet. They also make them for the knob and, if you have kids, they make them kid-appealing, as well. Thirdly, you want NON-SKID MATS both inside and out of the tub -- the one we had at the show were from Rubbermaid. Also, a SHOWER SEAT isn't just for elderly people. As a woman, I can't tell you how many times I've almost lost my balance and fallen while shaving my legs. The one we recommend is from Safety First and, like all of the items shown, can be found on Amazon.com.

Indoors or out, this is where a lot of falls occur. Steps are often unlit or slippery, especially during this season. So start with lighting: Sylvania's Motion Activated Stair/Hallway Kit is an LED motion-activated stairway lighting kit that only takes a few minutes to install. The sensor light only turns on when you approach the stairs and the kit comes with a light adjustment so you can set the amount of time the light stays on and how bright it is. Secondly, we try to save time by cutting corners, but stairs are the last place you want to do that, especially outside in the snowy and rainy seasons. Make sure your stairs have treads on them -- and hold the banister on the way down. And there are special precautions you absolutely need to take for children: Get a gate for the top of the stairs and netting for the rails. The Cardinal Gates Auto-Lo Slat Baby Gate 25 can be ordered online from Safe Beginnings, as well as Deck Netting. When you install the baby gate, make sure the gate opens AWAY from the stairs. As for the deck netting, as it is gets warmer and we spend more time outside, railings on the deck need to be close together -- you don't want them anymore than 2 and 3/8th inches apart to prevent your child from going through them. It goes without saying but we'll say it anyway: If you have ANY throw rugs in the house without non-slide bottoms, install it.

Tragically, kids of all ages fall out of windows and beware: A screen will not prevent a fall from happening. If you have a situation with a window either close to the ground or with furniture underneath it, you need to install WINDOW GUARDS, like the one we had on the set, from Safe Beginnings. Also, if you have a double-hung window, you don't want the window opening to be more than four inches, so you have two options: window wedges and window stops. They are super easy to install. And if you already have rugs that don't have non-slide bottoms, install a non-slide product underneath it.