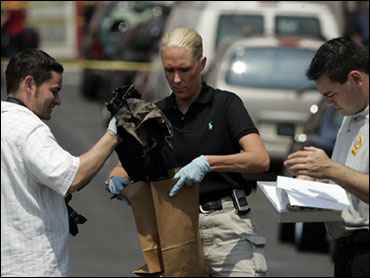 (AP Photo/Rich Schultz)
Investigators examine a pair of pants at the scene of a shooting on Reed Street in Jersey City on July 16, 2009.

JERSEY CITY, N.J. (CBS/AP) A shootout that left two suspects dead and at least five officers injured, two of them gravely, began on the street and ended in a Jersey City apartment building where drugs and violence are commonplace, neighborhood residents say. One of the suspects was wearing a priest's costume, according to CNN. And two officers are now fighting for their lives, reports WCBS TV.

The gunfight erupted Thursday morning during a police stakeout of a man and woman suspected of violent crimes in Jersey City and in South Carolina.

Police said the two who died were believed to be Hassan Shakur, 32, and Amanda Anderson, 22. They had been wanted in a June 18 armed robbery in Jersey City where a man was shot, police chief Tom Comey said. The pair was also suspected of a robbery in South Carolina. Both were pronounced dead at the scene.

The stakeout began after police tracked the 2005 Ford Focus used in the June 18 robbery to the hardscrabble Greenville neighborhood where the suspects were staying. Investigators learned the suspects moved it every other morning to avoid getting a ticket.

The suspects came out to the vehicle 30 minutes earlier than normal Thursday morning, when only two officers were on the scene. The man pulled out a pump-action shotgun and began shooting, police said, blowing out the police car's windshield and shooting one officer in the leg. Authorities said the woman did not have a firearm.

Second-floor resident Marlon Harrison said he heard gunshots echo off the alleyway outside his window.

"It was like the Army out there," Harrison said.

Abdias Cosme, 53, and his wife Margarita Robles, 50, said they awoke to the sound of gunfire, broken glass and running feet as two officers exchanged fire with an assailant wielding a shotgun on the street below their bedroom window.

"We went to the window to see what was happening and one of the policemen shouted at us to get back inside," Cosme said. "He was shooting at the people who were running into the building across the street."

SWAT officers fought their way into a third-floor apartment where the man and woman had taken cover and were met with shotgun blasts that ripped through the apartment building's walls and doors. Four officers were hit in that second exchange of gunfire, and three others suffered minor injuries from broken glass and the like.

"This individual came fully ready to go to war with us," said Comey. "This is a gun meant for nothing other than to hunt a man."

Video: WCBS reports two gunned down officers are now fighting for their lives.

Doctors at Jersey City Medical Center said Marc DiNardo, 37, a 10-year veteran of the Jersey City police, was in full cardiac arrest, with no signs of life, when he arrived for treatment. Doctors had to bring him back to life "five or six times" before they could stabilize him, Mayor Jerramiah Healy said. DiNardo was in stable but critical condition late Thursday.

DiNardo, the first officer to enter the apartment, had arrested Shakur in 2002 on an illegal firearms possession charge.

The other Jersey City police officers were identified as Michael Camacho, 25; Frank Molina, 35; and Marc Lavelle, 43. Port Authority official Dennis Mitchell, 35, was also wounded. Camacho was in critical condition after being shot in the neck. The other injured officers were treated and released.

President Barack Obama, in New Jersey for a fundraiser for Gov. Jon S. Corzine's re-election bid, mentioned the shooting and said he had been in contact with Healy. Corzine visited with the officers' families at the medical center Thursday night.

"It's a reminder what our law enforcement officials do each and every day to protect us," Obama said.