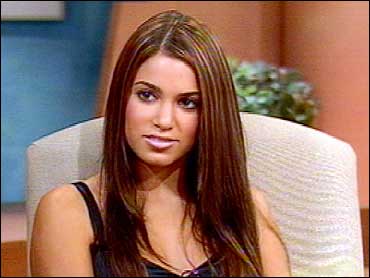 Since winning critical acclaim at this year's Sundance Film Festival, "Thirteen" has provoked debate and shocked parents with its realistic tale of two 13-year-old girls' loss of innocence through sex, drugs and shoplifting.

The film costars Nikki Reed, who was thirteen when she co-wrote the movie based on her own experiences. She will visit The Early Show Friday to discuss the controversial film.

In "Thirteen," Reed's character, Evie, is the popular, beautiful girl in school, and she knows it. Tracy (Evan Rachel Wood) witnesses the sexual power Evie wields, and so she decides to follow in her footsteps. But, Tracy finds premature adulthood has a price. She starts to bring home poor grades, loses her bond with her mother (Holly Hunter) and becomes a drug user — all within a year.

Reed says the Tracy character is infuriated by the lack of rewards for being a young female over-achiever. So, she rebels by becoming what she thinks society wants her to be.

Meanwhile, she says, Evie is insecure and projects confidence to mask her loneliness.

Reed, with the help of director Catherine Hardwicke, wrote the screenplay in six days. And, she says, the movie was filmed in 26 days.

"Thirteen" is currently playing in New York and Los Angeles. It opens nationwide in September.

The Latest In Eye Creams