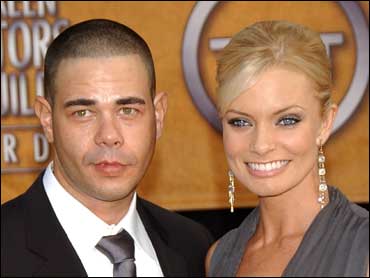 "One thing she did say when she gave me all the details is, 'This kid is gorgeous,' " her rep, Megan Pope, told The ShowBuzz on Friday.

The "My Name Is Earl" star made the official announcement that she was expecting on "The Tonight Show With Jay Leno" in November.

Pressly, who hails from North Carolina, said she and her fiancé, L.A.-based DJ Eric Cubiche, were trying for a baby.

"We are not planning a wedding right now," Pressly said at the time. "That's the last thing I want to do. There's a lot that goes into planning a wedding and we're very happy with the way things are right now. In due time we will."
By Amy Bonawitz
View CBS News In
CBS News App Open
Chrome Safari Continue
Be the first to know
Get browser notifications for breaking news, live events, and exclusive reporting.