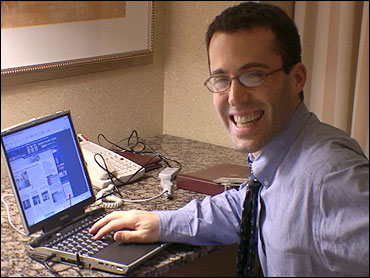 
Flat Stanley is a children's book character who wakes up one morning to discover he is perfectly flat after being smushed smooth by a bulletin board while he slept. Taking his two-dimensionalness in stride, Stanley puts his pancake like stature to good use by having his parents mail him to California to visit a friend when airfare proves too expensive.

Frugal Stanley? Probably the kind of guy the notoriously cost-conscious Howard Dean would like.

Well – now there is Flat Howard.

The creation of a Dean supporter in New Hampshire, Flat Howard made an appearance at the Rochester, N.H., Opera House Friday night where the doctor turned politician spoke to a group of undecided voters (though most of them were wearing Dean paraphernalia or carrying Dean signs).

As members of the traveling press headed out of the hall to the waiting bus, Flat Howard stood in the lobby prepared for a brief press conference.

What's an ever-inquisitive press pack to do? Questions began to fly from every which direction. How come you never wear brown suits any more? Are there any more turkey sandwiches? Why can't the press stay at nicer hotels? Who has the power?

Although Flat Howard made no comment, he smiled politely throughout the questioning. Just as the press conference concluded, 3-D Howard Dean joined his cardboard cutout for a few moments of lighthearted campaigning.