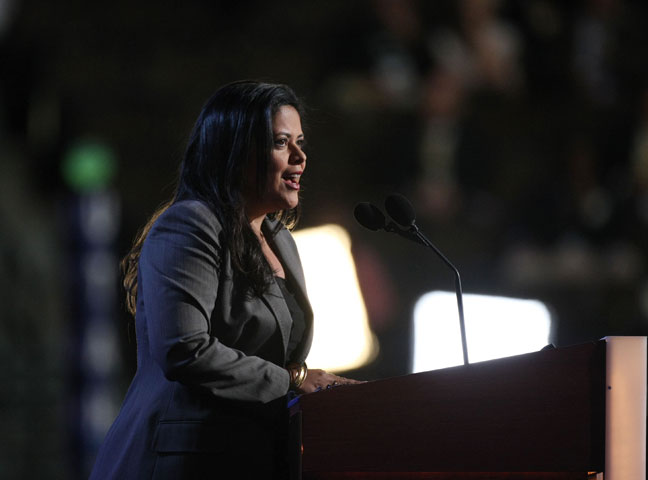 NEW YORK - Above a rooftop in Jakarta or the Indus River in Pakistan, the moon looms large in the childhood memories of Maya Soetoro-Ng, but President Obama's little sister hadn't realized how important those memories were until she was pregnant with her oldest daughter.

It was then she thought about how their mother, Ann Dunham, would jostle her awake wherever they were - in India or New York, England or Hawaii - to head outside so they could appreciate the moon. And how grandmother and granddaughter would never meet.

Suhaila, now 6, was born a decade after Dunham died of cancer, but Soetoro-Ng has paired her and "Grandma Annie" through the moon in a picture book out this month.

The dreamily drawn book from Candlewick Press, "Ladder to the Moon," opens with little Suhaila asking her mother what her grandmother was like. "She was like the moon," her mother replies. "Full, soft and curious."

In a telephone interview from her home in Hawaii, Soetoro-Ng told The Associated Press that she thought of her mother "a lot during my pregnancy, having come across boxes full of my children's books and toys that she had saved for me. That moment was a great shuddering moment of love and longing. I really did want to somehow connect the two of them."

She and husband, Konrad Ng, chose the name Suhaila because it means "glow around the moon" in Sanskrit.

The book describes how one night, a golden ladder appears at the girl's open bedroom window with her grandmother, hair flowing down her back and silver bangles tinkling on her arms. The two climb to the moon, looking down on a world filled with sorrow, from earthquakes and tsunamis, poverty and intolerance.

They invite children and others who are suffering to take refuge on their gray, glowing moon, until it's time for the girl to say goodbye and climb back into bed, knowing they've helped others heal.

Like Soetoro-Ng, who said she wrote the book to encourage unity, compassion and peace, Suhaila hopes the book will have an impact on the world.

She continued: "I think its awesome that my name is in the book becuaes I love books and maybe someone like me will read the book and feel like I am there friend."

Friendship was something that came easily to Dunham, explained Soetoro-Ng. Her mother lived in 13 different places around the world, first alone and later with her daughter and son in tow, but felt at home, "more or less," in each, Soetoro-Ng said.

And how did this affect Soetoro-Ng's famous brother? "That ability to break down perceived boundaries or cross bridges is something that he got from her," she said.

Dunham, divorced from Obama's father and years later from Soetoro-Ng's, died in 1995 at age 53 of ovarian and uterine cancer before the births of her four grandchildren - Suhaila, her 2-year-old sister Savita and their famous cousins, Malia and Sasha Obama.

A natural storyteller, Dunham passed on many of her best to her kids while under the glow of the moon.

"The moon sort of guided us to points of intersection," Soetoro-Ng said. "She loved the moon so much because the moon was the same for everybody and all of these people and places were connected because we shared the same moon." The book takes its title from Georgia O'Keeffe's 1958 painting of a floating ladder on an aqua background.

Born in Jakarta, Soetoro-Ng attended Barnard College and the University of Hawaii before earning her master's in secondary education from New York University. She spent several years teaching and developing curricula for public middle schools in Manhattan, then returned to Hawaii and received a Ph.D in international comparative education.

She now lives with her family in Honolulu, working as a cultural educator for the nonprofit East-West Center and lecturing in the education department at the University of Hawaii.

So when did she find the time to write a children's book? In Chicago, at her brother's kitchen table while helping to get him elected president. Soetoro-Ng had always wanted to write a book for young kids. At the time, Obama had just signed a contract for "Of Thee I Sing: A Letter to My Daughters," his picture book released last November.

"I felt suddenly brave, taking the risk of trying to get published," she said.

Soetoro-Ng, nine years younger than the president, has always celebrated her multicultural heritage as the daughter of a white American and an Indonesian dad, but Dunham has brown skin in the book - and deliberately so.

Soetoro-Ng showed her illustrator, Yuyi Morales, photos of Dunham and Suhaila before Morales went to work and "asked her to not be true to those pictures." Morales drew partly on her own Mexican heritage in creating the drawings.

Soetoro-Ng isn't finished yet as an author. Candlewick also plans to publish her young adult novel about a 16-year-old healer. No release date has been scheduled.