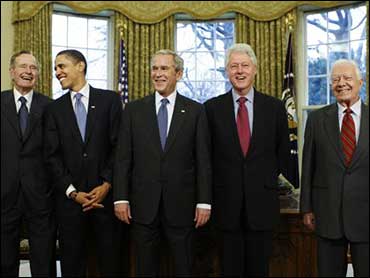 At the Oval Office today, White House press photographers were allowed for a minute or so to take pictures of Presidents Bush (the current and senior), President Carter, President Clinton and President-elect Barack Obama.

President Bush in brief remarks said something generous and, I'm sure, heartfelt. To the president-elect, he said, "We want to see you succeed."

A select few people know that responsibility, and this lunch today was a really good idea.

No, you don't want past presidents looking over your shoulder, but you want to hear their insights. You do want to know that if need be, you could seek their counsel.

It is said that being President of the United States is the loneliest job in the world. It wouldn't hurt to know you could pick up the phone and hear a voice on the other end say, "I hear you."