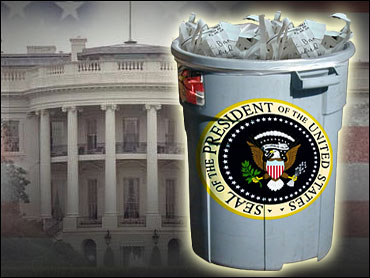 A public sanitation worker in Washington, D.C., on Tuesday found a thick stack of papers with nearly every detail of President Bush's trip to Florida on the floor next to a big trash truck.

The documents offer the exact arrival and departure time for Air Force One, Marine One and the back up choppers, Nighthawk 2 and 3, as Washington CBS affiliate WUSA-TV first reported.

The documents also list every passenger on board each aircraft, from President Bush to the military attaché with the nuclear football. CBS News chief White House correspondent Jim Axelrod reports it was a copy of the president's exact schedule for the day, which the public never sees for security reasons.

Sanitation worker Randy Hopkins told WUSA-TV reporter Bruce Leshan that he could not believe what he was seeing when he discovered the presidential schedule.

"I saw locations and names and places where the president was going to be. I knew it was important. And it shouldn't have been in a trash hole like this," Hopkins said.

The documents also offer the order of vehicles in the President's motorcade, Leshan notes.

Hopkins is an ex-con working in sanitation, and said he felt it was his civic duty to tell somebody about what he'd found, he told WUSA-TV.

"We're going through a war, and if it would have fell into the wrong hands at the right time, it would have been something really messy for the president's sake," Hopkins said.

WUSA faxed a copy of the document to the Secret Service, which told the station that it was a White House staff document, not a Secret Service document.

And while it is marked "official," the Secret Service says the document is not classified, Leshan reports.

Typically certain members of the White House staff receive the exact details of the president's schedule, Maer notes, and reporters are given a broader outline that is always marked "For planning purposes only, not for publication or broadcast."

Axelrod reports it's not the first time something like this has happened. Vice President Dick Cheney's security detail once left behind instructions for protecting him in a souvenir shop. President Bill Clinton's motorcade once took off leaving behind the military aide who carries the black bag with the nuclear codes — he had to walk back to the White House.

Many White House offices have "burn bags" that are used to discard sensitive documents, Maer adds.

"I drop everything in the bag at the end of the day," an official told CBS News.

It appears this one made it into the general trash.