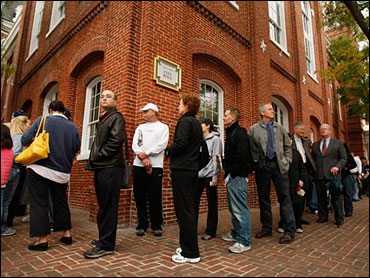 Even in reliably Republican states where Barack Obama has little chance of winning the presidential vote on Tuesday, unprecedented numbers of registrations and early votes have been tallied, and elections officials are predicting a record turnout in places where neither candidate even bothered to campaign.

An aggressive and well-financed get-out-the-vote campaign helped Obama's campaign mobilize unprecedented numbers of African-American and new voters who could help decide the presidential election by swinging states like North Carolina and Virginia to the Democrat.

But even in so-called "red" states like Alabama, Utah, Nebraska and Oklahoma, Republican strongholds where McCain could post double-digit wins, Obama's candidacy helped boost registration numbers, particularly in urban areas. Republicans countered by mobilizing their own base, a process aided by John McCain's vice presidential pick, Sarah Palin, who's popular among conservatives.

"It may not shift Alabama from red to blue, or shift Tennessee from red to blue," Ferrel Guillory, an expert in Southern politics at the University of North Carolina, said of the turnout projections. "But it could have an effect over the long term."

And while these states have been comfortably in McCain's column for months, a record turnout could benefit candidates further down the ballot. As in swing states, the consensus among experts is that the trend favors Democrats.

Roughly 9 percent of the electorate still claim to be undecided or likely to change their minds, CBS News director of surveys Kathy Frankovic reports.

These voters, Frankovic notes, are mostly conflicted over the economy.

In Alabama, a state that has gone consistently Republican in presidential elections since picking Ronald Reagan in 1980, Obama's army of volunteers conducted voter registration drives that helped push the state's voter rolls past 3 million for the first time, and they registered blacks at a faster rate than whites.

"Obama realized there was no way to wrestle Alabama away from McCain," but a higher African-American turnout is likely to benefit Democrats running for the state Supreme Court and other offices, said D'Linell Finley, a political scientist at Auburn University Montgomery.

The story is similar in Tennessee, which saw many more early voters than in 2004, especially in Democratic-leaning counties; and in South Carolina, where records fell for both registration and absentee voting.

"There are going to be some tight races that normally were not going to be tight," said South Carolina's Republican Party chairman, Katon Dawson, who has no doubts about a McCain victory there but is worried about down-the-ballot contests.

"I think we have very good prospects to pick up a congressional seat or two," said his Democratic counterpart, Carol Fowler.

Nebraska, which has given all five of its electoral votes to Republicans in every election since 1964, fell just 3,000 short of a record for voter registration, but Secretary of State John Gale was forecasting record turnout anyway.

And even there "Republicans are not gaining to the same degree as Democrats and independents," he said. "You definitely have to attribute it to the Obama campaign."

Nebraska is one of two states that can split its electoral votes, and Obama opened three offices in Omaha to try to shave off one of those votes.

But even as Obama managed to inspire Democrats in decidedly Republican states, Republicans had a secret weapon of their own in rallying conservative voters.

McCain's selection of Palin was critical to building enthusiasm among the party's traditional base, said Merle Black, a political scientist at Emory University in Atlanta.

"She is giving a voice to a lot of conservative voters - particularly evangelicals - in a way McCain never could do on his own," he said. "She's a heroine in the religious community."

Early voting in Oklahoma set an all-time high, and a record turnout on Election Day appeared likely, according to Mike Clingman, election board secretary. Polls there have shown Obama getting about a third of the vote, about the same as John Kerry four years ago.

State Democratic Party Chairman Ivan Holmes is expecting a strong Obama turnout in urban areas, but he anticipates a backlash in some conservative areas where the candidate's race may be a factor - "especially among older voters." Obama is aiming to become America's first black president.

Texas saw its voter registration hit a record 13.5 million this year. But neither presidential candidate spent much time in a state that has gone Republican in every election since 1980.

Randall Dillard, spokesman for the secretary of state, said both sides were driving the registration boom.

"History can be made," he said, "no matter how this race goes."

Obama already came up a big winner in the presidential race in Dixville Notch and Hart's Location, N.H., where tradition of having the first Election Day ballots tallied lives on.

Obama defeated McCain by a count of 15-to-6 in Dixville Notch, where a loud whoop accompanied the announcement. The town of Hart's Location reported 17 votes for Obama, 10 for McCain and two for write-in Ron Paul. Independent Ralph Nader was on both towns' ballots but got no votes.

Both towns had favored George W. Bush in the last two elections.

Dixville Notch's first voter, following tradition, was picked ahead of the midnight voting and the rest of the town's 21 registered voters followed suit in Tuesday's first minutes.

Town Clerk Rick Erwin says the northern New Hampshire town is proud of its tradition, but says "the most important thing is that we exemplify a 100 percent vote."